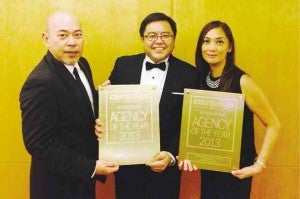 Alex Syfu, Ronald Barreiro and Merlee Jayme with the awards

You would have been under a rock if you had not, at least once, heard the name DM9 JaymeSyfu this last year.

Starting the year on a high as 2012 Campaign Asia Pacific Agency-Philippines, the agency caps 2013 superbly, bagging the same top honors for 2013 at the Ritz Carlton in Singapore last Dec. 11. This time, it comes with double the sweetness as its chair and chief creative officer, Merlee Jayme, becomes the first Filipino to win Creative of the Year for Southeast Asia.

The back-to-back win is outstanding for DM9 JaymeSyfu, pitted as they were against mighty counterparts such as Silver winner Ace Saatchi & Saatchi, Bronze winner Leo Burnett, BBDO Guerrero and TBWA\Santiago Mangada Puno.

“Winning the Campaign Asia Philippine Agency of the Year last year inspired us to do better. I guess that’s why it created the perfect environment to come up with nice innovative ideas. This year’s win made us happier and hopefully hungrier,” says Jayme, still thrilled at the wins.

“I was totally humbled to be a finalist, to join very big names in the region. What more to win the award! It’s a dream come true. Honestly, I’m still walking on clouds,” Jayme adds.

That would be Cloud DM9. The agency rode the first half of the year riding on the wave of “Hits” and “Bury the Past,” two critically acclaimed and multi-awarded digital campaigns for the socio-political women’s group. Then came Cannes Lions in June, and with it a whirlwind of awards. 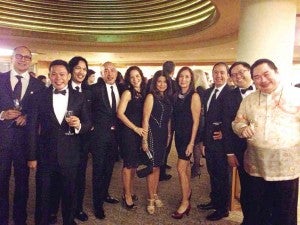 The Philippine Team at the Ritz Carlton, Singapore

Campaigns like Smart “Txtbks” showed the agency at its best, bringing home the country’s first Cannes Lions Grand Prix in 2013. While it wowed critics and won its fair share of global awards, Smart “Txtbks” continues to inspire. Countries like India and South Africa are making it the model in recycling simple, almost obsolete, technology of old SIMs and mobile phones to address an overwhelming education crisis. Jayme herself has made countless talks on that revolutionary work.

The Cannes Lions win for Smart “Txtbks” started the ball rolling, making a remarkable run totaling five Grand Prix awards for Direct, and Mobile in Spikes Asia in Singapore, another two in Korean AdStars including Grand Prix of the year. The work also has two Gold awards from London International Advertising Awards, and two from Digital Asia Festival, as well as Silver from EPICA. Just recently, it was given the highest honor the DDB Worldwide Network can give, the Bill Bernbach Grand Prix, a first for the Philippines.

Last January, DM9 JaymeSyfu packaged its celebrations with the launch of its digital arm ingeniously named Di9it. For the trio of Jayme; Alex Syfu, partner and chief relations officer; and Ronald Barreiro, partner and general manager, it was a tactical move, as it was to rope in Carlo Ople as Di9it’s managing director, with Ople being the current toast of both the blogosphere and branded media.

Generated from a prolific crop of talent and spunk—DM9 JaymeSyfu isn’t called small but credible for nothing—Di9t has garnered its fair bit of accounts won, with Johnson & Johnson’s digital AOR under its belt.

While a handful of Grand Prix wins is impressive, it is undoubtedly the quality of work that DM9 JaymeSyfu churns out that flies their flag.   Profound and durable stories that hit, and hit hard, are what make history.

DM9 JaymeSyfu, still a very lean and mean agency of 30 heads, will surely generate chatter with its long, long string of hits in 2013. Much is at stake for 2014, though. For the agency, expectations will only ignite their rocket to greater heights, packing more ammo. And, who better to drill that in but their “chairmom” Jayme, who says, “We are very demanding from everyone in the agency. That’s why we personally want to thank every DM9ner for all the hard work and passion every day. DM9ners rock!” Sometimes mom has to be a drill sergeant.

Also from the DDB family, Gil Chua won Silver as Agency Head of the Year-Southeast Asia, while David Tang of DDB Group Singapore got the Gold.