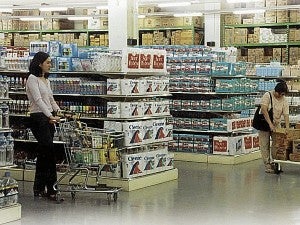 Saying the government shouldn’t profit from the people’s misery, Sen. Alan Peter Cayetano has called for “floating rates” in the collection of the value added tax (VAT) to control skyrocketing prices whenever the costs of basic commodities go up.

“Lowering prices or making sure that prices do not skyrocket should be a priority of this government. The Christmas gift I’m asking from this administration during this Christmas break is for them to study these proposals,” Cayetano told reporters shortly before the holidays.

Cayetano proposed that Congress adopt a joint resolution that will either suspend the collection of certain taxes whenever costs go up or that will impose floating tax rates of 6, 9 and 12 percent depending on when costs go up or down.

“Whenever prices go up, the income of the government increases. So there’s a conflict of interest on the part of the government. On one hand, it wants prices to go down. On the other, it wants to increase the taxes it collects,” he added.

Cayetano made the remark after the Manila Electric Co. announced a P4.15 power rate hike. A little over 70 centavos of the rate increase will mostly go to the government as taxes.

The Supreme Court has since imposed a 60-day temporary restraining order on the rate hike.

Cayetano doesn’t expect his proposals to make a dent on the revenue collection targets of government.

“The amount of taxes for 2014 won’t be affected because we are already exceeding projections. If the projected generation cost was P5.50 per kwh, we’re already at P9,” Cayetano said, referring to the recent power rate hike the Supreme Court stopped.

“The P3.50 or P4 power rate hike also has an added incremental tax so we’re not decreasing the tax on the first P5.50; just on the increase. The same with petroleum products and other commodities,” Cayetano added.

Cayetano said that while government could keep prices down by addressing the problem of hoarding among traders to create artificial shortages, it could also ease up the collection of taxes when prices become too steep for consumers.

“The other way is simply to assure people that the priority of government is to keep prices down rather than collect taxes.  As we saw in the case of the price of electricity, we saw that after it went up, the government even earned additional revenues,” Cayetano said.

“While [the increase] was something it didn’t do, it also didn’t raise a howl,” Cayetano added.

Cayetano said that during the Marcos dictatorship, the government suspended the tax on the importation of the liquefied petroleum gas after the cost of cooking gas became difficult to bear.

“He made the importation tax-free to help the consumers,” Cayetano said.
RELATED STORIES: