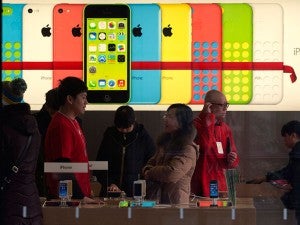 A woman talks to a salesperson in front of an advertisement for iPhones at Apple’s retail store in Beijing Monday, Dec. 16, 2013. AP FILE PHOTO

On Sunday, the US technology giant and China Mobile unveiled a deal to bring the iPhone to customers on a network with an estimated 760 million subscribers and until now dominated by low-cost Android smartphones.

The US company’s iPhone 5s and iPhone 5c phones will be available at China Mobile and Apple retail stores across mainland China starting January 17, they said in a joint statement.

Pricing details were not announced.

Negotiations between Apple and China Mobile took years, with one key hurdle reportedly being the US firm’s demand for sales volume guarantees.

“In our view, this has been the most difficult carrier agreement for Apple to negotiate in its history,” said a note from Cantor Fitzgerald.

“However, we believe the opportunity for the iPhone to expand its reach within China Mobile’s wireless subscriber base will prove to be well worth the wait.”

Cantor Fitzgerald estimated that there are already 35 to 40 million iPhone users on China Mobile, but they use the provider’s slower networks.

Sunday’s deal opens up the faster network for iPhones and positions the US company to sell phones on the even-faster 4G network as its reach expands.

Cantor Fitzgerald estimated the deal could result in 20 to 24 million iPhone sales to China Mobile in 2014. Such a performance would have an earnings benefit of $4 per share.

Barclays predicted the China Mobile deal would have no impact on the upcoming quarter, but should benefit sales in the March and June quarters.