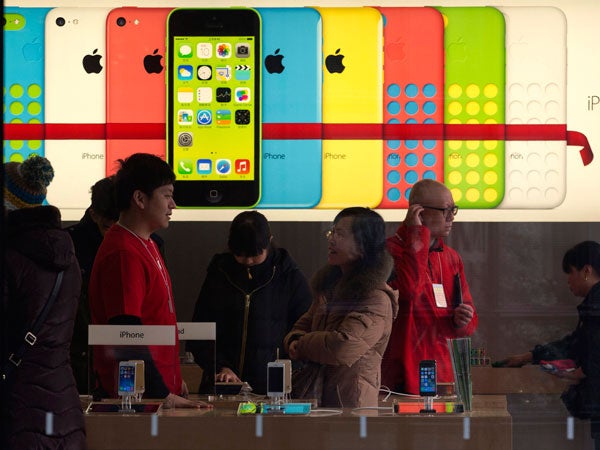 A woman talks to a salesperson in front of an advertisement for iPhones at Apple’s retail store in Beijing Monday, Dec. 16, 2013. AP FILE PHOTO

NEW YORK – Apple said Sunday it had reached agreement with China Mobile, the world’s biggest wireless network, to bring the iPhone to customers in a market dominated by low-cost Android smartphones.

The deal gives Apple entry into the huge Chinese market and could boost sales after a drop in its global market share, with access to China Mobile’s 700 million subscribers. The network is also rolling out the world’s biggest 4G network.

Under the agreement, iPhone 5s and iPhone 5c phones will be available at China Mobile and Apple retail stores across mainland China starting January 17, Apple said in a statement.

“We know there are many China Mobile customers and potential new customers who are anxiously awaiting the incredible combination of iPhone on China Mobile’s leading network,” said China Mobile chairman Xi Guohua.

Apple CEO Tim Cook stressed that “China is an extremely important market for Apple and our partnership with China Mobile presents us the opportunity to bring iPhone to the customers of the world’s largest network.”

He said “iPhone customers in China are an enthusiastic and rapidly growing group, and we can’t think of a better way to welcome in the Chinese New Year than getting an iPhone into the hands of every China Mobile customer who wants one.”

Negotiations between Apple and China Mobile took years, with one key hurdle reportedly being the US firm’s demand for sales volume guarantees.

Cantor Fitzgerald Research estimated that 35 million to 45 million iPhones were already on China Mobile’s network as of October, despite the lack of a deal between the companies.

The market tracking firm estimated that Apple could sell as many as 24 million iPhones on the China Mobile network next year if it were added to the network’s formal line-up.

Industry tracker IDC forecast that smartphone sales in China will reach 360 million this year and, with the issuance of 4G network licenses and iPhones launched on China Mobile, top 450 million in 2014.

China Mobile has a unique 3G standard of its own that is not compatible with any existing iPhone models, although the Californian giant’s handsets can be used on other networks in China.

But the Chinese government granted three state-owned operators licenses early this month to offer services on the faster and better quality 4G network, expected to usher in a new era of competition between mobile phone makers.

Apple will still have to compete with low-priced smartphones powered by Google’s free Android software.