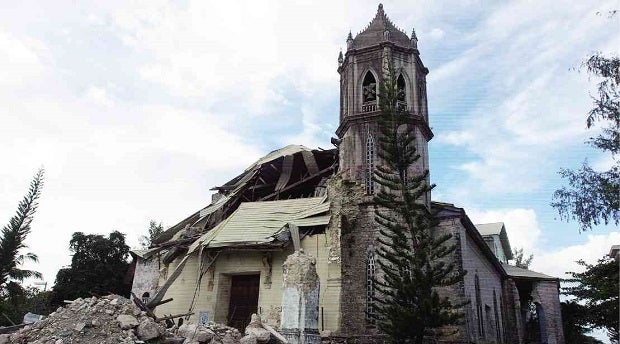 ANOTHER damaged church in Dauis. Photo by Tessa R. Salazar

LOBOC, Bohol—What the 7.2-magnitude temblor that struck this province on Oct. 15 did in just a little over a minute, could take up to two decades for human hands to undo.

Staff of the Manila-based National Museum could be seen collecting artifacts from the site where the rubble of the 411-year-old church stands. Assistant parish priest Gerald Lopena of the St. Peter the Apostle Parish Church related to the Inquirer that the complete restoration and rehabilitation of the partially damaged church could take more than 15 years. He added that the National Center for Culture and the Arts (NCCA) has been at the site and is continually briefing the parish on the restoration plans. 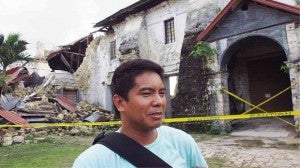 LOPENA, and what was left of the Loboc church. Photo by Tessa R. Salazar

“We are in consultations for building a temporary church for liturgical restoration,” he said.

Lopena, who was ordained in 2010 and whose first assignment is in this parish, said he had only been here for three years when the massive earthquake happened, causing the partial collapse of the church, including the convent.

Lopena said: “I was inside the convent at the time. The convent is totally destroyed. The only structure left was the room where Fr. Andy Ayco (the parish priest) and I stay. It was only after the earthquake that I was able to come out. Several parishioners thought I was dead.”

Aside from Loboc, the National Disaster Risk Reduction Council previously reported that churches in Baclayon, Loon and Maribojoc as well as at least 18 other churches in Bohol were damaged. 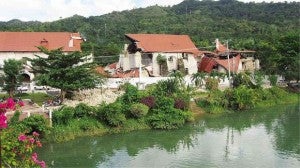 VIEW from the Loboc River. Photo by Tessa R. Salazar

Mary Ann Espina, the dean of UP College of Architecture, told the Inquirer Property on Nov. 26 during the Manila conference titled “Sustainable buildings, infrastructures and communities in emerging economies” held at Richmonde Hotel in Eastwood City that restoration “is beyond cultural. It is scientific.”

Espina said the college can support the restoration in its academic aspects, explaining, “the college is an advocate, an educator. And then we will provide the laboratory in the college.”

She said: “So when the earthquake happened, we were asked by Senator (Edgardo) Angara, who is a patron of architecture and a friend of the college, what it was that the UP College of Architecture had been doing. I told him that we were on standby mode, because at that moment it was not feasible to rush to Bohol.”

She said: “We said we were on standby mode because the NCCA and the National Historical Society and the NHI (National Historical Institute) were there. We didn’t want to duplicate the work they were doing. They are the representatives of the cultural groups. And they have actually started an assessment of the damage to the heritage structures.”

Espina continued: “So, the best we could do is to take off from whatever it is that they are able to assess. Whatever assessment they made. They will assess on the basis of the amount of damage and the loss to the culture.”

She added: “So, because Angara asked, we presented a game plan. This was prepared by Prof. Tina Bulaong. And in her game plan—and it’s a big one—is that there are several phases of work that will have to be done to engage the college in a scientific study.”