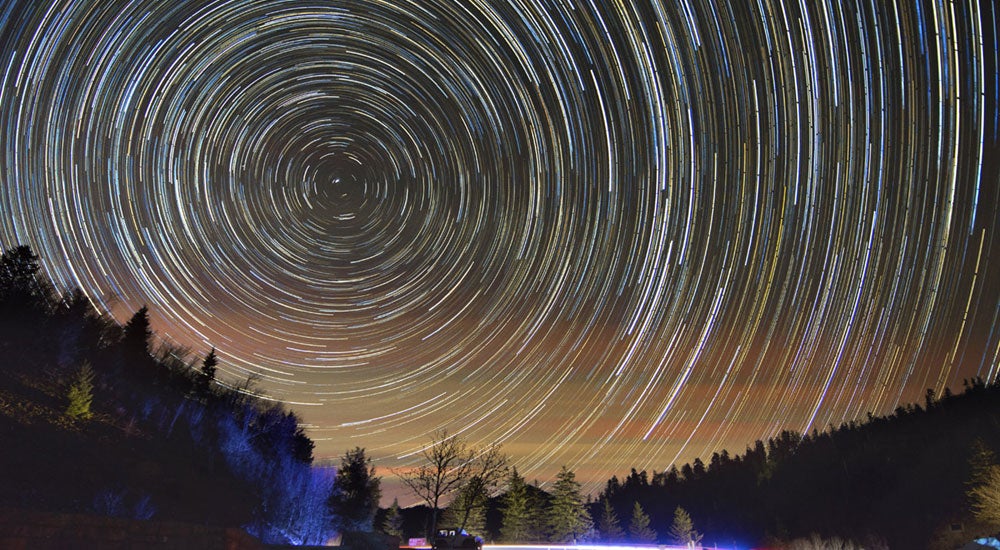 In this photo made by combining 264 20 second exposures, stars leave rings of light behind as they wheel around Polaris, the North Star, over Newfound Gap in the Great Smoky Mountains National Park on Dec. 1, 2013. A new study into the so-called Goldilocks zone—the distance from a star at which water on a rocky planet can exist as a liquid rather than as permanent ice or vapour—concludes that the Earth’s oceans will evaporate away but that it won’t happen for another billion years or so. AP

The good news: It won’t happen for another billion years or so.

Those are the conclusions of a new study into the so-called Goldilocks zone—the distance from a star at which water on a rocky planet can exist as a liquid rather than as permanent ice or vapor.

As in the fairy tale, a planet’s temperature has to be not too hot and not too cold, but just right for sustaining the stuff for life as we know it.

Jeremy Leconte of the Pierre Simon Laplace Institute in Paris investigated a well-known phenomenon in astrophysics: as a star ages, it increases in brightness.

In their simulation of Earth, the Sun’s rising luminosity will eventually cause a runaway greenhouse effect, they found.

Water vapor is a greenhouse gas. This means that beyond a certain point, increasing vapor from the warming oceans will stoke Earth’s surface temperature—which in turn causes more sea water to evaporate, and thus adds to the warming, and so on.

In around a billion years, liquid water on the surface of the planet will have completely disappeared, leaving an utterly desiccated surface, according to their model.

The high-tech modeling includes a 3-D simulation that factors in solar heat per square metre, the seasons and the vapor cycle.

Previous models have tended to simulate the Earth as having a simple and uniform climate system. They usually place the start of the evaporation as soon as 150 million years from now, which is relatively brief in geological terms.

The study, published in the journal Nature on Wednesday, concludes that the Goldilocks zone may be somewhat bigger than thought.

The precious zone starts at 0.95 Astronomical Units (AU) for a star that is the size and present age of the Sun, it says.

One AU is 149.6 million kilometeres (92.95 million miles), being the average distance between the Earth and the Sun—the orbit of our planet is slightly elliptical.

By comparison, Venus, Earth’s sister planet in size, lies at 0.75 AU: it is just a bit too close to the Sun.

In its infancy, it may have had oceans, when solar luminosity was less than today, some astrobiologists believe.

Today, scorched, bone-dry and barren, it is shrouded with thick, roiling clouds of carbon dioxide.

The findings could be useful for understanding exoplanets, or planets that orbit stars outside our Solar System, say the authors.

The hope is to locate a rocky planet in the Goldilocks zone, so if the zone is wider than thought, this boosts the statistical chances.

So far, astronomers have only discerned uninhabitable planets made of gas, or rocky planets that are so close to the Sun that any atmosphere they had will have probably been stripped away.