Moody’s warns against risks to stability 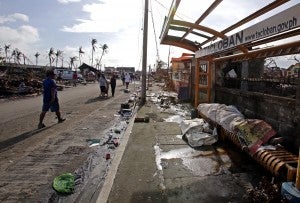 The national government’s perceived “inadequate response” to Supertyphoon “Yolanda” and the pork barrel issue may jeopardize the country’s political stability, which has been instrumental in allowing the economy to grow at record rates.

International debt watcher Moody’s Investor Service likewise noted that the average income of households in the Philippines, which is one of the lowest among countries rated at “investment grade,” posed a risk to the country’s economic prospects.

“The favorable political backdrop that has facilitated the government’s recent track record of policy performance could be threatened by ongoing deliberations related to discretionary spending by politicians or perceptions of an inadequate response to Supertyphoon [Yolanda],” Moody’s said in a report Tuesday.

Moody’s cited reforms implemented by the Aquino administration, which holds control over both houses of Congress since taking office in 2010, that have contributed to the country’s economic boom.

These included an enhanced budgetary discipline through the introduction of zero-based budgeting, the ongoing disaggregation of lump-sum funds and stricter financial oversight of government-owned and controlled corporations (GOCCs).

The rating firm also praised the government’s implementation of the one-year validity for all appropriations. Moody’s said this enabled the government to outperform its deficit targets over the past two fiscal years.

These reforms have led to significant improvements in the country’s rank in the World Bank’s Worldwide Governance Indicators scorecard. “Government effectiveness has shown even stronger gains and is now considered better than not just its regional peers India and Indonesia,” the rating firm said.

The rating firm said the administration’s political capital might shrink because of recent criticism over its response to Yolanda and the pork barrel issue, which forced one top administration executive to resign earlier this month.

It also noted that the per capita income in the Philippines was among the lowest for similarly rated countries—second only to India. Government data released this week showed that 25.2 percent of the population lived below the poverty line in 2012 despite the economy growing by 6.8 percent that year.

Even with these risks to the country’s growth, Moody’s remained confident that the Philippine economy would continue to expand at its current pace for at least two more years to come.