One in four Filipinos remains poor 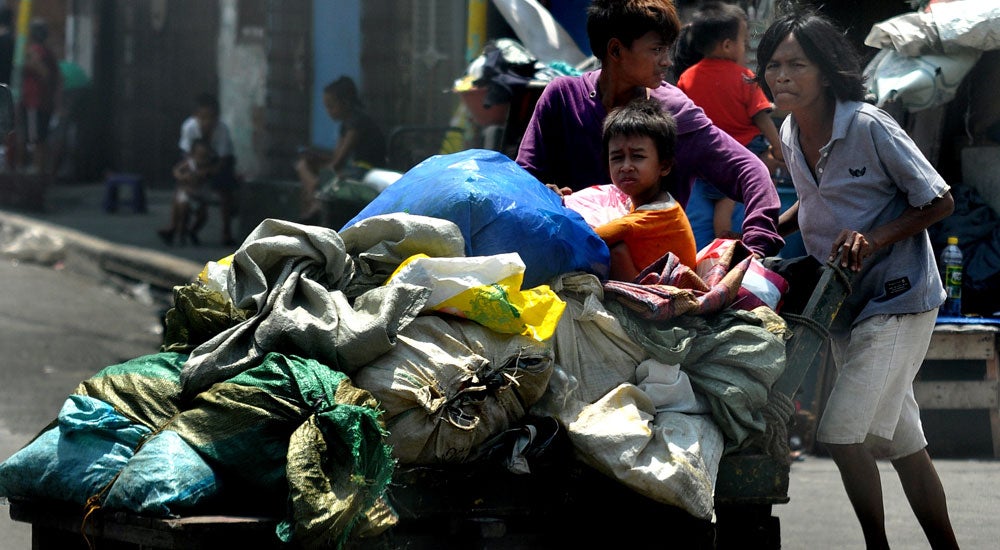 Poverty remains a serious challenge despite the Philippine economy’s rapid pace of expansion in the past two years.

The National Statistical Coordination Board (NSCB) reported Monday that 25.2 percent of the country’s population lived below the poverty line in 2012, only slightly better than the 26.3 percent in 2009.

Also, 19.7 percent of Filipino families were below the poverty line in 2012, only marginally lower than the 20.5 percent three years before.

The poverty threshold for 2012 was set at P7,890. This means that a family of five earning less than that amount every month was considered poor.

The minimal drop in poverty incidence was despite the 6.8-percent expansion of the Philippine economy last year, which was one of the fastest growth rates in Asia.

Economic officials acknowledged that the pace of poverty reduction remained slow, with the Philippines remaining one of the few countries in Asia that is off-track to meet the Millennium Development Goal (MDG) on poverty reduction by 2015.

Under the MDG, a commitment made by member countries of the United Nations, poverty rates must be halved by 2015 from their levels in the 1990s. In the case of the Philippines, poverty incidence must be trimmed to just 17.2 percent.

The National Economic and Development Authority (Neda), however, said the government has not officially given up on the goal, adding that it remained a “fighting target.”

Economic Planning Secretary Arsenio Balisacan, who is also director general of the Neda, said the government would further expand the coverage of the Conditional Cash Transfer (CCT) program, conduct more livelihood activities and implement initiatives at improving human capital, among other measures, to more significantly reduce the poverty rate in the next two years.

“[The drop in the poverty rate in 2012] was still a slow decline, but we will take it as indication of accomplishment, or more accurately, a work in progress, in the fight against poverty,” Balisacan said in a statement. “We will fine-tune our strategies accordingly.”

From about 3 million families in 2012, the coverage of the CCT grew to 3.9 million this year and is targeted to rise further until hitting 4.6 million by 2015. Under the CCT, the government grants cash subsidies to the poorest households on condition that children are sent to public schools and, together with their mothers, regularly visit health centers for medical checkup.

Neda Assistant Director General Rosemarie Edillon said in a press briefing yesterday that the robust economic growth for a year should not be expected to cause a sharp decline in the poverty incidence. She explained that a robust economic growth should be sustained over a couple of years in order to witness a more significant drop in poverty rate.

She said the fact that the Philippines was prone to natural disasters made it more difficult to trim the poverty rate in the country as such events, which disrupt employment and destroy property, had a tendency to pull some families below the poverty line.

Omicron variant found in almost one-third of US states