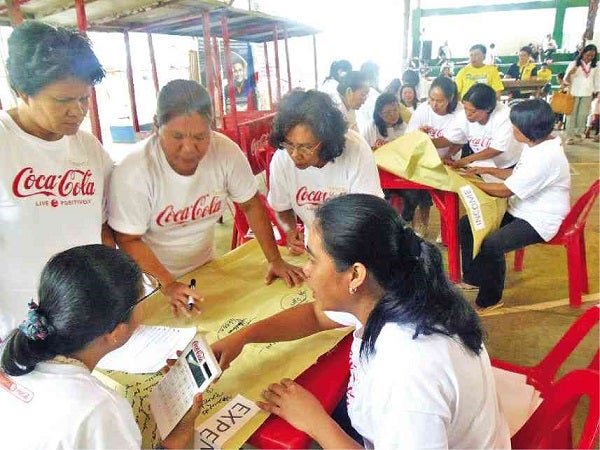 THE WOMEN partners of the S3TAR program during the Records Keeping of Income & Expenses Competition at the Panaad Festival, supported by Coca-Cola and Tesda.

Over the past years, the Philippines has seen a new breed of women emerging, successfully taking on top brass positions as well as bigger and more daunting roles in the family and society.

And it is a fact that has been recognized globally as the latest UN Gender Gap Report ranked the Philippines fifth out of 130 nations for closing the gender gap based on key areas like economic participation, political participation and empowerment, health and survival, educational attainment, and economic equality.

The story, however, may be different for some women, particularly in the rural areas, where the traditional image of the Filipina, often limited to being a doting mother and a loving housewife has largely remained unchanged.

While there is nothing wrong with that image, Coca-Cola Philippines however believes that it can further empower these women to play bigger roles and become enablers in the society.

Gilda Maquilan, sustainability manager of Coca-Cola Philippines, explains in an interview that when the parent firm “redefined” its sustainability framework in 2010, it targeted to “touch” every facet of its business from people to environment, as it moves to achieve its 2020 vision of doubling its business.

When it comes to the people aspect, Coca Cola decided to focus on empowering women involved in its value chain to become successful entrepreneurs in their respective businesses, she adds.

Coca-Cola then came up with the 5by20 program in 2010, signifying its commitment to enable the economic empowerment of 5 million women entrepreneurs across the globe by 2020.

The program allows Coca-Cola to address the most common barriers women face to succeed in the marketplace. It also offers women access to business skills training courses, financial services, and connections with peers and  mentors, along with the confidence needed in building a successful business.

Adel Tamano, vice president for public affairs and communication at Coca-Cola Philippines, explains that the program can be customized depending on the market. In Africa, for instance, the participants in the 5by20 program are the small growers of oranges and mangoes, while in Brazil, it was the artisans. In the Philippines, the focus was on women who manage their own sari-sari stores, he says.

“One of the principles of the 5by20 program is local embeddedness, which means you take a look at the country and [find] the strongest business case,” Tamano says.

Maquilan explains that the Philippine chose the sari-sari store segment in the value chain because about 80 percent of Coke products are still being sold in these traditional trade outlets.

Locally, the 5by20 program translated into the Sari-Sari Store Training and Access to Resources (S3TAR) Program, aimed at further enhancing the business knowledge and skills of women sari-sari store owners and operators.

Coca Philippines inked a partnership with the Technical Education and Skills Development Authority (Tesda) in 2011 for the said program, which provided women with training, access to financial support, access to merchandising and store assets, and social development interventions. More importantly, the program has sought to capacitate and empower women entrepreneurs as strong contributors to the local economy.

According to Maquilan, the S3TAR Program was also meant to address the many barriers and challenges that women sari-sari store owners face, including the business and financial management aspect of their businesses; the lack of adequate representation to avail of loans; and lack of peers and mentors to help boost confidence.

“This is really about women and empowering them. Their varying roles (as mother, wife, provider), are not and cannot, most of the time, be monetized or calculated. Part of the training is to show to women their contribution … We are redefining what it means to be a woman in this society,” Maquilan says.

“In designing this program, we were told that it has to empower women. What did that mean? We had to consult with experts from the Tesda and NGOs because at first, we thought the trainings will be just about financial management. But we learned that if you want to achieve true empowerment, you have to start with self, instill that confidence and match it with skills training,” she further explains.

Following the signing of the agreement with Tesda in 2011, Coca-Cola Philippines began implementing the S3TAR Program in 2012, wherein some 10,000 women were trained. This year, another 10,000 women sari-sari store owners are expected to be trained as well, running up to a total of 100,000 by 2020.

According to Maquilan, the program involved a 12-week Basic Entrepreneurship and Gender Sensitivity Training, to be conducted by Tesda trainers once a week for a half-day session.

After the training, the participants will be introduced to the company’s microfinance and women NGO partners.

“The intervention per beneficiary should last until three years although our partners said that you get to measure the impact in six to eight years’ time. So what we did is that we try to get the women we trained to become part of our NGO partners for peer mentoring and monitoring,” Maquilan says.