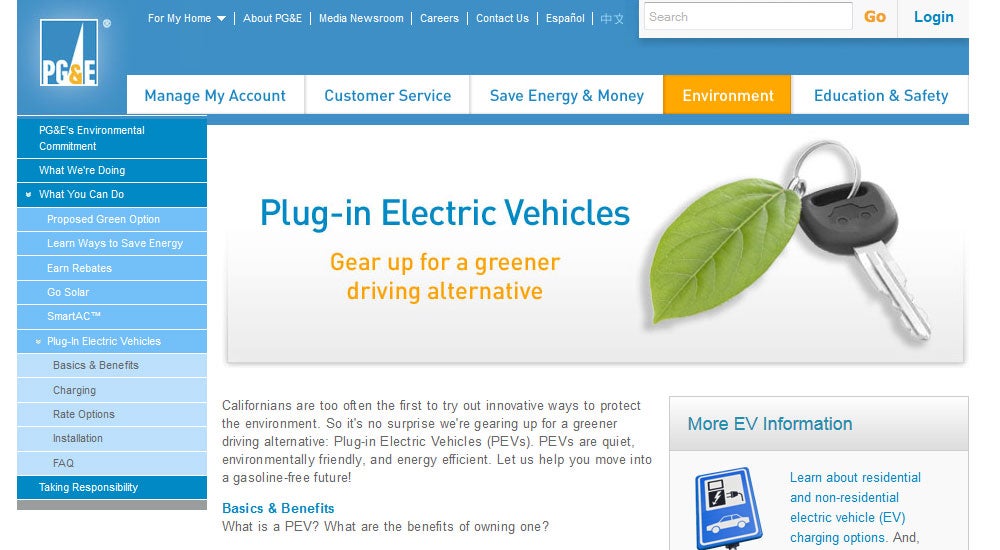 PG&E operates one of the largest green fleets in the country, with over 3,400 electric or alternative fuel vehicles. Vehicles on display will include the following:

Electric Vehicles International Class-5 Range Extended Electric Vehicle (REEV) Worktruck is the industry’s first Class-5 plug-in extended range electric vehicle. It was built in Stockton, California, by Electric Vehicles International (EVI) and developed in a partnership between PG&E, EVI and the California Energy Commission. It features an all-electric range of 45 miles and fuel savings of up to 30 percent when the units are operating in hybrid mode. These vehicles also feature up to 75kW of exportable power that can be used to provide service to homes and businesses during planned and unplanned outages.

PG&E operates 942 Class-5 vehicles, which include its trouble truck fleet, and would save $3.5 million in fuel costs and reduce GHG emissions by over 9,000 metric tons annually by replacing those units with these models built right in the heart of its service territory.

Peterbilt/Allison Transmissions Electric Hybrid Class-8 Material Handler Truck is another first for the utility industry. PG&E premieres the first electric hybrid material handler truck developed in partnership with Peterbilt and Allison. The H 3000 features parallel hybrid architecture that supplies blended power from a conventional diesel engine with an Allison automatic transmission, a powerful electric motor with a regenerative braking kinetic energy recovery system, and stored energy from batteries. This unit is being put into service in Oakland.

PG&E owns and operates 412 material handlers, which are used to inspect, repair and maintain the company’s vast network of transmission and distribution power lines, and with an anticipated fuel savings of 25 percent, the company would save nearly $600,000 per year with this technology.

The 2014 VIA Extended Range Electric Vehicle Pickup Truck was developed in partnership between PG&E and VIA Motors. These are the auto industry’s first extended-range electric trucks, offering a range of up to 40 miles on all-electric prior to switching to hybrid mode. These vehicles also feature an exportable power capacity of up to 25kW, which can be used to power tools used by crews in the field and to provide power during small outages.

The Mobile Command Vehicles can support up to 15 people for long-term deployments during emergency situations and include a generator, workstations, laptops, satellite phones, radios and a radio controller that permits integrated communication with other emergency agencies.