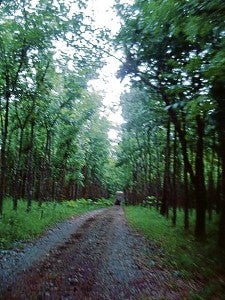 UMINGAN, Pangasinan – While many are wishing to own a tree that grows money, a family in this town is growing thousands of trees that will hopefully not only bring them money but also help protect the environment.

Money, indeed, does not grow on trees. But the Sebastian family, who owns Marrse Tropical Timber Plantation, knows it takes years, hard work and caring before their trees could be sold and become money.

Their plantation began as a hobby in the early ’90s when tree planting became popular in the country.

Mario Sebastian Sr., 63, a businessman engaged in dealing agricultural chemicals, started to plant mahogany seeds in his backyard in Urdaneta City. The seeds were collected by his eldest son, Mario Jr., from Ateneo de Manila University (AdMU) where he was studying high school, and from the nearby University of the Philippines’ campus in Diliman, Quezon City.

“We were able to plant thousands of mahogany seedlings that the pathway was the only space available in the 2,000-square-meter yard. My father then decided to look for a property to start the plantation,” Mario Jr. says.

The elder Sebastian scouted for properties in 1992 and found contiguous lots, covering 20 hectares, in remote Barangay San Vicente. These lots sold for only P2 a square meter. That time, the place was devoid of vegetation, except tall cogon grasses. 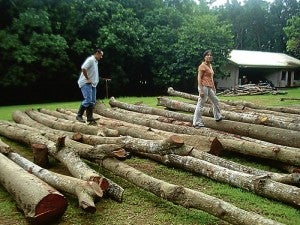 Sebastian bought another 40-hectare property in nearby Barangay Luna. He had to get a P30-million loan from Quedancor Bank to start the plantation.

Twenty years later, the plantation is one of the most sustainable tree farms in the country. Thousands of mahogany trees that the family planted stand tall and sturdy, but it may take five to 10 more years before they mature, and another 30 years before they reach full commercial potential, Mario Jr. says.

Sebastian passed on to his children his love for trees.

Mario Jr. says it must be those years of collecting the mahogany seeds and helping their father plant them in bags that he grew passionately in love with tree farming. 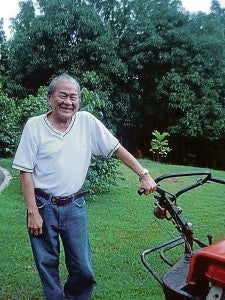 With their educational background, the three could easily land good-paying jobs in multinational companies, but they opted to focus their efforts on the family-owned plantation.

When the Philippine Daily Inquirer visited the plantation, Mario Jr. and Marco were in shirts, jeans, boots and their hands muddied.

“We have just formed a company and formalized the organizational structure,” Mario Jr., the president and chief executive officer, says. Marco is the chief operations officer while Maria Angela is the marketing officer.

The brothers are hands-on in managing the plantation, getting their hands dirty by working alongside their workers daily.

“Whatever the workers are doing, we also do,” says Mario Jr.

They have no formal training in tree farming.

“We learn through experiments and by consulting foresters and government agencies, and by researching with the help of the Internet. The first 20-ha plantation was really trial-and-error,” Mario Jr. says.

“Everything here passed through our hands – from selecting and sorting the seeds, planting them in bags, replanting and taking care of them,” he adds. 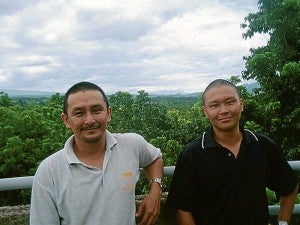 Whatever lessons they learned in the farm, they practice in the Luna plantation where they take care not only mahogany but also teak and gemelina, and native trees, like narra and kamagong.

Mario Jr. says they planted Honduras mahogany and teak because these species are most marketable abroad. The plan is for the timber to be sold in foreign markets where they can fetch higher prices.

The bigger plan is also to have a wood processing plant which can cater to other plantations in the area. The family is looking for a partner for a joint venture.

“We are encouraging our town mates to plant trees which they can sell to us. That way, they do not have to sell their land as they can earn money from tree farming. Many residents have actually started planting and all houses have trees in their yards,” Mario Jr. says.

According to the Sebastians, they subsist on help from relatives and friends who “paid for the trees which they will harvest years from now.” 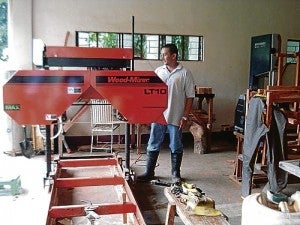 A MINI sawmill which the Sebastians use to make furniture. Photo by Yolanda Sotelo, Inquirer Northern Luzon

“It is like they own the trees and we take care of the trees for them,” Mario Jr. says.

The plantation brings income to the family through several means.

One is when they cut down the trees which are not of quality, such as those that are stunted, bent or are sick. These are sold or taken to a sawmill for cutting. The plantation has a small sawmill that they use to make furniture and small wooden items.

“We also sell the wildlings [saplings growing in the wild] from P2 to P6, depending on their sizes. Those interested could come and gather the wildlings and pay for what they get. We don’t really count, we believe in honesty,” Mario Jr. says.

Another source of income is selling twigs and branches as firewood for P18 a bundle. These are sold for P28 in nearby town markets.

The Sebastians also conduct on-site tree farming seminars during weekends for a fee of P6,000 to P10,000 per person per day, inclusive of meals.

“We teach them how to plan plantations, how to care for trees, everything that is needed to know about tree farming, based on our experience,” Marco says.

But the biggest satisfaction that the family gets from tree farming is their being able to help nurture the environment.

When they started the farm, the land was almost arid, but now the water table seems to have gone near the surface and springs have sprouted in several areas.

The air is also cooler in the area even during summer, the Sebastians say. Birds and snakes have also been seen there.

After the plantation’s life span, Mario Jr. says 25 percent of the original trees will be left. But there will never be empty spaces because the trees will regenerate on their own, he says.

Read Next
Hotel’s new website fuses old and new
EDITORS' PICK
Would the military allow me to stay this long if I’m inutile? – Duterte
In good spirits: SMDC helps farmers and residents through Kadiwa Market
Pre-order the new vivo Y20s [G] to get a free TWS earphone
DSWD chief admits ‘slow start’ in distribution of aid in ‘NCR Plus’
Smart three-peats as country’s fastest mobile network – Ookla
65% of Filipinos say Duterte’s health should be made public – SWS
MOST READ
Vico Sotto frets getting photos of ‘butt vaccination’ from Pasig dwellers
Metro Manila to have shortened curfew hours from 8 p.m. to 5 a.m. under MECQ
San Miguel Corp. continues to invest heavily in the Philippines’ future
COVID-hit Roque slams ‘un-Christian’ query on how fast he secured hospital bed
Don't miss out on the latest news and information.