Faces of the Filipino micropreneurs 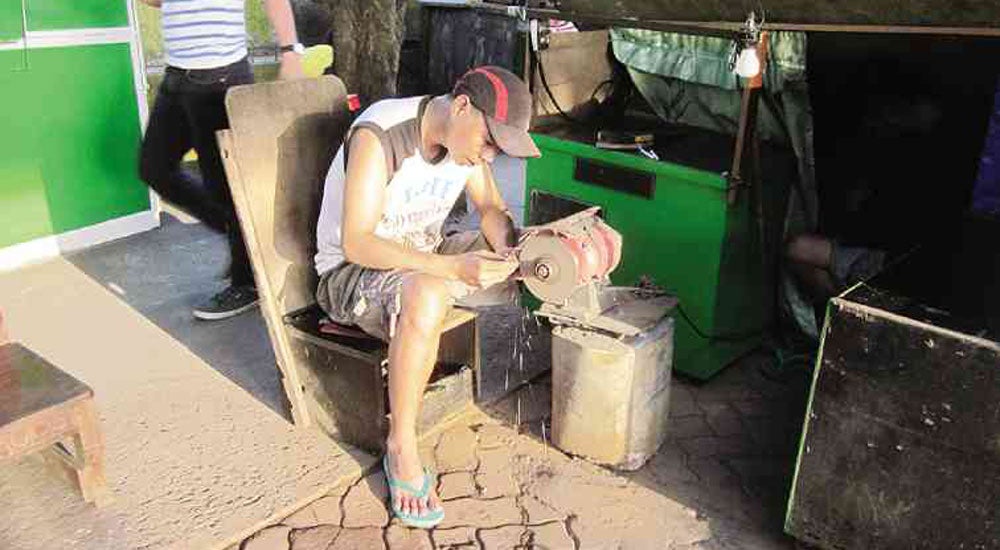 MANILA, Philippines—Alwin, 39, father of four, had a hard time in his native Iligan City because of his limited education. To top it all, he was courting a girl named Angelie. They got married, and decided to migrate to Metro Manila in search of a better way to earn a living.

He became a sharpener (naghahasa) of knives, itak and other bladed weapons, a skill he learned suddenly. His friends and compadres call him “pareng lagare” and he still uses the electric grinder that he bought for P1,200 10 years ago. “Maliit lang ang puhunan ko (my investment is small),” he says.

His customers are carpenters, maintenance men and gardeners of well-off people who live nearby.

On good days, usually a Sunday, he earns P1,500 but much less on other days. And during bad weather, he has no choice but to close shop and business suffers considerably. 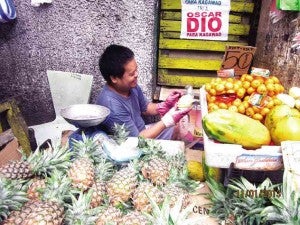 Fruits are good for your health.

Russel, 46, from Lucena City and father of one, is a vendor who just buys his goodies from the nearby market: “Namamalengke lang ako,” he says. Sometimes his wife, Raquel, accompanies him. He displays an array of candies, sandwiches, Tipas hopia, all sorts of instant noodles, potato chips, soft drinks, and other snacks dear to the heart of the Filipino consumer, especially children.

His puesto (place) is right beside a jeepney loading and unloading zone, which ensures a steady stream of consumers. These include students, workers, passersby, office people and commuters.

“Ang puhunan ko ay galing sa Bumbay (my investment or seed money comes from the Indian moneylenders),” says Manang Rufina, another vendor who has a permanent puesto near a busy flyover and a school.

The reference was to Hindu or Sikh moneylenders, distinguished by their turbans and ubiquitous motorcycles, who in street parlance are known as “5-6” because of the interest that they charge—P6 for every P5 borrowed.

Rufina, mother of three and originally from Baliuag, Bulacan, would rather deal with a Filipino moneylender because the Indians are strict (“mahigpit”). But the latter seems to have a monopoly on the moneylending trade.

On good days, Rufina can earn less that P1,000 but business slumps when school is out. To augment income she sells the three major dailies and sleazy tabloids. The Inquirer is always the first to be sold out. When that happens, the reader can always go to the nearby 7-Eleven convenience store, where for a breakfast of only P49 you can have a copy of the paper for only P5. 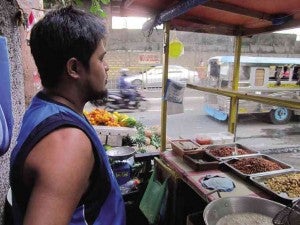 Peanuts are said to be good for your digestion, if not for your heart (“like all nuts,” observes friend Rustie O., himself a nut). Peanuts are also the livelihood of Rex, 30, who hails from Allen, Northern Samar. His peanuts are hubad (skinless), matamis (sweet), and may balat (with skin). He himself boils the peanuts in a big frying pan.

The product is sourced from Divisoria, Manila, per bag and Rex can earn P750-950 daily. Business, he says, is fine (“maayos naman”) and the handsome, bearded vendor can even joke: “Nakakabuhay ng dalawang asawa” (It can take care of two wives).”

Fruits, on the other hand, are loaded with vitamins and all agree that they are good for one’s health. Fruits are the bread-and-butter/rice-and-fish of Tata, 38, father of five and originally from Surigao del Sur.

These come from Tanauan, Batangas.

Buddy, 41 and father of two, is from Cabayog City, Samar, but grew up in Manila. A watchmaker, he opened his little stand in 1996, having bought his tools—small screwdriver, batteries, bracelets and spare parts—from Recto Ave., Manila. He works every other day repairing all kinds of watches and earning P500, sometimes more, on any given day.

In 2004, Manang Corazon, originally from Virac, Catanduanes, set up an outdoor carinderia (eatery), protected only by make-shift cloth, right outside her housing unit and beside a school. It soon became a favorite of the students, who could be seen from Mondays to Fridays—in their spic-and-span, dark blue-and-white uniforms—crowding the place, and placing their orders before the harassed servers.

The food served is better than most, home-made (“lutong bahay”) and uniformly priced at P35, plus P10 for rice. On any given day you will see such favorites as dinuguan, sweet and sour pork, adobo, nilagang baboy, chicken curry, corned beef and lumpiang shanghai.

Daily earnings “ay hindi pare-pareho (vary), depending on the students,” says Corazon. But on good days she may earn up to P5,000 daily. No school, however, during weekends and so she too closes shop. 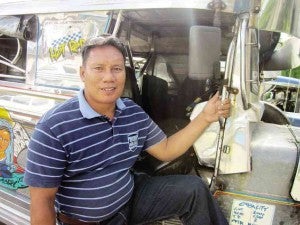 Rodrigo and his jeepney.

Rodrigo, 44, is a professional driver and in the agency where he once worked he was learning to be a good photographer, thanks to his supervisor, Mr. Toledo. Unfortunately, things didn’t work out and he and wife, Cristy, who has good business sense, decided to go back to his native town of Catubig, Northern Samar, where they planted palakata (acacia falcata) trees.

To their surprise, they made a killing during harvest time. And so they went back to Metro Manila and invested in a jeepney, which Rodrigo often drives but sometimes turns over to a friend (boundary is P700). Usually he earns P1,500 daily net. Their firstborn, Kristine Joy, is a Business Administration graduate; Keenan is taking up Marine Transport and the youngest, Krisha, is in high school.

Manang Arsenia, from Mangatarem, Pangasinan, and mother of two, is some kind of Brechtian Mother Courage. Her problem—or shall we say challenge—started when her husband, Antonio, a seaman, suffered a slipped disc on board the ship and was deemed permanently disabled as far as seafaring was concerned. He spent two and a half months in a Manila hospital.

Arsenia did not want him to be operated on. Instead, she swung into action. She started selling beauty products, but for some reason sales were not encouraging. So she went into vending dried fish like daing and dilis along with kamatis (tomatoes), plus lots of fruits.

To her surprise, the fruits outsold the dried fish, so she concentrated on these. She is still at it, and earning well. Antonio is now able-bodied and takes turn tending to the business. In three days, they can register a profit of P5,000.

“Ayokong mangutang at pinapaikot ko ang pera (I don’t want to borrow and so I keep the money going around),” Arsenia says.

Through their heroics, scrimping and saving, investing wisely, depositing and then withdrawing come tuition time, Arsenia and Antonio have been able to send their two children to private schools—the eldest, 19, a boy, has just graduated from the Asian Institute of Maritime Studies and the girl, 17, is taking up mass communication at Lyceum University.