Remittances rose to $1.94B in September | Inquirer Business

Remittances rose to $1.94B in September 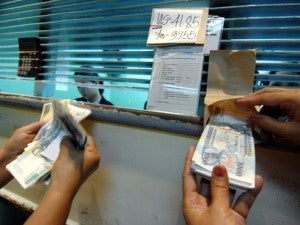 In a statement, the BSP said cash remittances for September reached $1.94 billion, higher by 5.3 percent in the same month the year before. This was the highest monthly level since December of last year, when remittances reached a record $1.98 billion.

This brought the year-to-date remittances to $16.48 billion, higher by 5.8 percent last year.

“Remittances were driven mainly by the steady demand for skilled and professional Filipino manpower,” the BSP said.

Preliminary data from the Philippine Overseas Employment Administration (POEA) showed that at the end of September, approved job ordered reached 609,948, of which 38.3 percent were processed job orders for services, production, professional and technical workers.

The BSP said bulk of the remittances that entered the country came from land-based workers with contracts of more than a year—a good indication of the stability of flows. Cash from this segment made up 75.4 percent of the total for September.

“Furthermore, the continued expansion of the coverage of bank and nonbank service providers in foreign countries through tie-ups and the establishment of remittance centers abroad have continued to capture a larger share of remittances,” the BSP said.

At the end of September, there were 4,409 locations around the world where Filipinos could send cash to their families in the country, the BSP said.

Remittances are the country’s largest source of foreign exchange, which allows the country to maintain a current-account surplus that provides support for the peso. The BSP expects remittances to grow by 5 percent this year to $22.5 billion.

These inflows are also one of the main drivers for domestic spending, which makes up about 70 percent of gross domestic product (GDP).