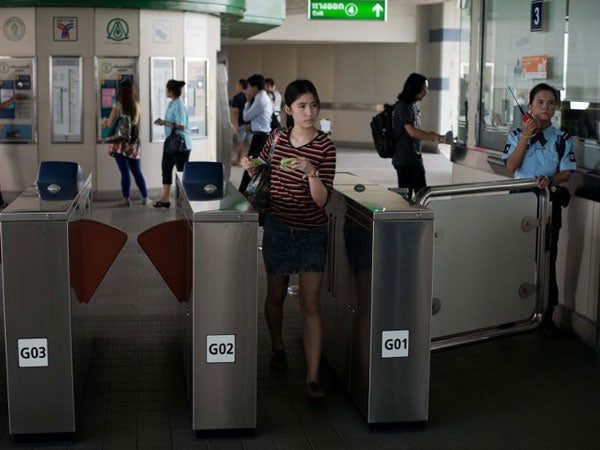 A woman valids her ticket at the entrance of a BTS station (sky train) in Bangkok on March 20, 2013. East Japan Railway, trading house Marubeni and electronics giant Toshiba have landed a deal to construct a new 23-kilometer (14-mile) rail line in the Thai capital, the business daily Nikkei reported Sunday, Nov. 3, 2013, adding the rail operation is set to start in 2016. AFP

TOKYO—A Japanese consortium will build an urban transit system in Bangkok, as part of Japan’s drive to expand exports of railway infrastructure to the rest of Asia, a report said Sunday.

Under the deal, ordered by Bangkok Metro Public Co., the consortium will construct a new 23-kilometer (14-mile) rail line in the Thai capital, the daily said, adding the rail operation is set to start in 2016.

The Japanese group will supply 63 train cars and build the power grid, signals and rail yards as well as 16 stations for the project.

It will also provide maintenance services under a 10-year contract and about 20 technicians with operational expertise will be stationed in Bangkok, the report said.

East Japan Railway will aim now to win a contract to build a high-speed train line between Malaysia and Singapore, the report said.

Meanwhile, Tokyo Metro, which runs an intricate subway network in the Japanese capital, has been cooperating in an urban train project in Hanoi, the daily said.