7 ways to check structures after an earthquake 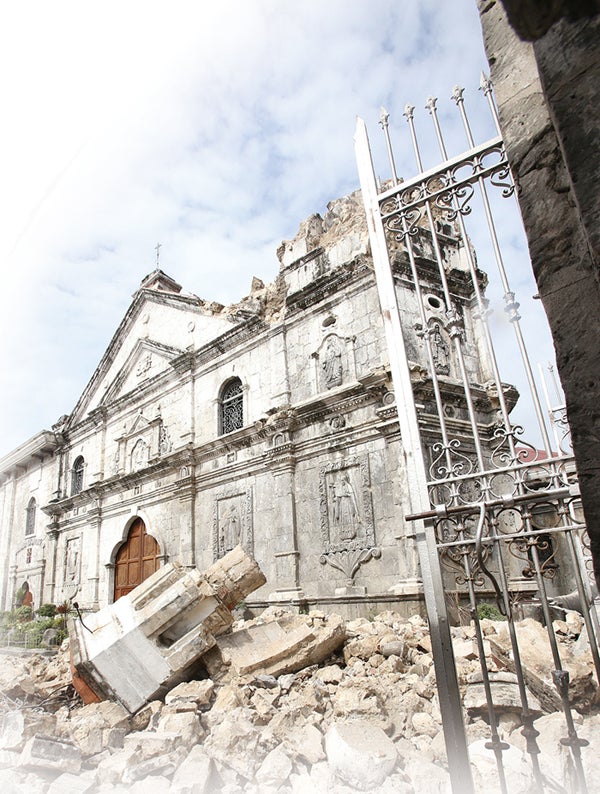 As the people and government of the provinces of Bohol and Cebu, and Siquijor Island assess the aftermath of a magnitude 7.2 earthquake that occurred on Oct. 15, citizens in these areas can be proactive in the proper evaluation and rehabilitation of structures and establishments affected by the temblor.

Alexis A. Acacio, director at the University of the Philippines Institute of Civil Engineering, and structural engineer Rodolfo Cabael shared seven things to consider immediately after an earthquake.

1 Expect ground movements to continue. “After an earthquake, there is a possibility that there is ground settlement (subsidence). This can be  easily seen if there is relative movement of the ground floor to the existing ground level. Ground floor slabs can also heave,” Acacio said.

2 Check for tilting and plumbness. “A building can tilt and the plumbness (vertical alignment) of the building should be immediately inspected,” added Acacio, whose expertise is geotechnical engineering.

3 Seek qualified inspectors immediately. Cabael advised that safety evaluation personnel from the city or municipal engineers’ office and experienced civil/structural engineers from the private sector are qualified to examine and determine if buildings are safe enough to be reoccupied.

4 Ordinary citizens can spot check. The wait for authorized inspectors might take some time, as these professionals grapple with such a large-scale natural event. Cabael suggested that during this time, building occupants and owners can immediately check by themselves if there has been significant visible damage on the structure and on where it stands.

“First, on the exterior, a visual check should be done on all sides of the building,” Cabael stressed. A visual check would reveal the following:

• Presence of cracks on the ground where the building is located. There may be separation between the walls/columns and ground concrete slab or the soil foundation;

• Severe diagonal cracks of more than 3 millimeters on concrete members and separation on connection joints for steel and wood;

• Tilting of the building; and

• Damage may not only be on structural but also on non-structural components such as partition walls, glass on windows, ceiling which should also be checked as they may pose danger if they fall.

Cabael added: “The occupants should be careful when they enter the building after an earthquake. It may appear to have only minor damage outside, but inside there may be severe damage. Be careful of hidden damages that may be covered by the ceiling, light partition walls, etc.”

“The practical thing to do, if these manifestations are present, is to stay out and not to go back inside the building until the proper qualified personnel arrives for inspection and declare whether the structure is safe or not,” Cabael advised.

5 Abandon condemned structures immediately. Cabael said the moment the building is declared condemned, and before any demolition is done, a temporary fence should be installed on its perimeter to prevent anyone from coming near the condemned area. The people living around the condemned building should check if the structure has tilted wherein components might have a chance of falling on passersby or on the adjacent properties. In this case, the authorities should be notified immediately so that proper measures can be done or other forms of barriers installed for the protection of individuals.

6 Help hasten the inspection process. “Once the inspection team arrives, people should cooperate by providing all the information the team needs to access the area [like the] possible dangers that may have been observed before their arrival, etc. People should stay on the side and avoid interfering with what the inspectors will do, but they should also be attentive to what these inspectors will need should an emergency arise,” Cabael explained.

7 Never neglect structural design codes. This serves as a warning, or a wake-up call, to other areas in the country whose “Big One” is yet to happen. “Earthquakes are a natural phenomenon that can never be predicted. We, Filipinos, in constructing a house, have the tendency to say ‘Puwede na ’yan. Matibay na ’yan. Hindi na kailangan ng engineer (That’s strong enough, no need for an engineer to design that),’” Cabael observed.

He warned: “For sure, if this earthquake is to happen in Metro Manila at this moment, a lot of houses and buildings will collapse or suffer severe damage due to neglect in following the structural design code. But there is still time to improve these structures, time to repair, time to retrofit and time to reconstruct before the Big One comes.”

Acacio strongly urged building owners to have their structures inspected and retrofitted, rebuilt or reinforced to meet the standards of the building code. “It’s for everyone’s peace of mind.”