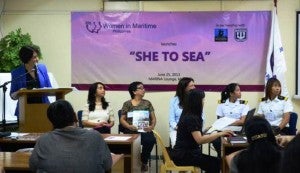 MANILA, Philippines—As part of its efforts to work for the interests of Filipino seafarers, Angkla party list formally filed a resolution in the House of Representatives, urging the Departments of Labor and Transportation to aid in advancing the global seafaring careers of undervalued Filipino women mariners.

Spearheaded by Angkla Partylist Rep. Jesulito Manalo, the resolution highlights the strengths in both character and skill that women in maritime possess but are most often overlooked by the male-dominated industry in which they operate.

Angkla now appeals to various government and maritime stakeholders to create the policies and programs that will increase opportunities for women who dare to dream of sailing the world’s oceans.

Precedence must be placed on the safety and security of women on board through proper legislation which Angkla hopes to enact in Congress.

This comes at a crucial time for the international maritime industry as a shortage of marine officers has been perceived and the need to develop the abilities of women seafarers remains ever more apparent to be able to respond effectively to this threat.

The resolution also reiterates that with the country’s intrinsic affinity to the sea due to its archipelagic composition as well as the renowned reputation of the country as the “seafaring capital of the world,” the possibilities for Filipino global maritime professionals should transcend all gender barriers.

In particular, support for the “She-to-Sea Campaign” launched by the non-profit maritime organization Women in Maritime-Philippines (WIMAPHIL) on the Day of the Seafarer last June 25, 2013 is likewise deemed indispensable.

WIMAPHIL was established in 2007 in response to the International Maritime Organization’s (IMO) directive to empower and widen the participation of women in the global maritime industry.

The program aims to draw the attention of global ship owners to the important roles women seafarers play in the merchant marine profession and encourage them to create more job opportunities for women on board their vessels.

Planned activities of the campaign include publishing stories of successful women in the maritime industry to important global shipping stakeholder and researching on the status of Filipino women seafarers.

Other activities are encouraging the idea of women seafarers as a viable solution to the shortage in merchant marine officers, enlightening ship owners to the various employment issues women seafarers face, and working with relevant government agencies such as DOLE and Marina to establish programs that will facilitate employment access to the maritime industry for women seafarers.

Through the joint efforts of Angkla and WIMAPHIL, the maritime industry is given opportunities to begin to break through the glass ceiling that has defined marine employment, eventually paving the way for women seafarers to benefit from equal, prosperous maritime careers that will ultimately help them contribute to the future of their loved ones back home.