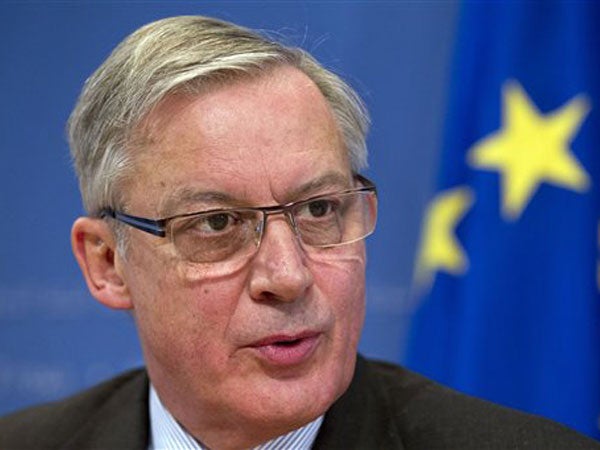 Governor of the Banque de France Christian Noyer speaks in a news conference during the World Bank/IMF Annual Meetings at IMF headquarters, Saturday, Oct. 12, 2013, in Washington. World finance officials prepared to wrap up three days of meetings in Washington, where fretting about the risk of an unprecedented U.S. debt default overshadowed myriad worries about a shaky global economic recovery. AP

WASHINGTON — World finance officials pledged on Saturday to deal with new risks to the global recovery while they kept up pressure on the United States to address the biggest threat of all — a market-rattling default on U.S. debt.

The International Monetary Fund’s policy committee said the United States needed to take “urgent action” to address the budget impasse that has blocked approval of legislation to increase the government’s borrowing limit before a fast-approaching Thursday deadline.

U.S. Treasury Secretary Jacob Lew, who has shuttled between the global finance talks and negotiations with Congress over the debt ceiling, has warned that he will exhaust his borrowing authority Thursday and the government will face the prospect of defaulting on its debt unless Congress raises the current $16.7 trillion borrowing limit.

Across town from the global finance meetings Saturday, an effort at the Capitol to pass a one-year extension of the borrowing limit failed to get sufficient votes. But in a more hopeful sign, negotiations to end a partial government shutdown, now in its 12th day, and raise the debt ceiling began between Democratic and Republican Senate leaders.

Global finance officials were nervously monitoring those talks during their three days of discussions, held around the annual meetings of the 188-nation IMF and its sister lending agency, the World Bank.

At a concluding news conference, World Bank President Jim Yong Kim stressed the urgency for Washington policymakers to reach agreement on raising the debt ceiling before the Thursday deadline.

Kim said if the debt ceiling is not increased, the economic fallout could include increased interest rates, slower global economic growth and falling business confidence. Such an outcome, he said, would have a “disastrous impact” on poor nations.

Mario Draghi, head of the European Central Bank, said Saturday that he found it “unthinkable that an agreement won’t be found.”

Draghi expressed hope that a resolution could be found soon.

“If this situation were to last a long time, it would be very negative for the U.S. economy and the world economy and could certainly harm the recovery.”

Asked what might happen if the U.S. budget debate were not resolved for six months or more, Singapore Finance Minister Tharman Shanmugaratnam, the chairman of the IMF committee, said it would be harmful to the entire world because it would be a blow to the confidence that is needed for businesses to make investment decisions.

“If we don’t clear resolution of the U.S. debt issue, it is hard to see how that confidence will come back so it is a critical issue for all of us.”

Adopting language used Friday by the Group of 20 major economies, the IMF’s policy panel in its closing statement said, “The United States needs to take urgent action to address” the uncertainties created by the budget impasse.

The IMF panel called on emerging economies, which have been key in recent years to global growth, to undertake the reforms they need to better withstand the adjustments that will come as central banks such as the Federal Reserve begin the process of withdrawing the economic support that has kept interest rates at ultralow levels.

Emerging market economies benefited from investment flows as investors poured money into those nations during the period when rates were low in the United States and other major economies. But many of the emerging economies have been rocked in the past few months as the investment flows reversed as investors rushed for the exits following the Fed’s signals in June that U.S. higher rates could be coming.

Countries such as India and Indonesia have been among the hardest hit as their currencies and stock prices tumbled.

In addition for the need for developing countries to improve their economic fundamentals to withstand the transition, the IMF called on the Fed and other major central banks to pursue interest-rate policies that are “carefully calibrated and clearly communicated.”

Critics have charged that the Fed has botched its communications strategy and left investors confused while Fed officials contend that the economy has not improved as expected, and because of that, it delayed an expected initial reduction in bond purchases at the September meeting.

Now with the hit to the U.S. economy from the partial government shutdown and the uncertainty over the debt ceiling, many economists believe the Fed will not start trimming its $85 billion in monthly bond buys until next year after Vice Chair Janet Yellen, who was nominated this week to succeed Fed Chairman Ben Bernanke, takes over in February. Her nomination by President Barack Obama must win Senate approval.

Many economists believe that once the transition has been accomplished, the global economy should actually begin growing at better rates in part because less support from the Fed will mean the U.S. economy is doing better and serving as a market for foreign products.

“A while ago there was an excess of exuberance and now perhaps an excess of pessimism,” Alexandre Tombini, the head of Brazil’s central bank, told the International Monetary Fund’s policy-setting panel Saturday.

Lew told finance ministers that the United States understands the role it plays as “the anchor of the international financial system.” He assured the finance officials that the administration was doing all it could to reach a resolution with Congress to reopen the government and increase the borrowing limit.

Russian Finance Minister Anton Siluanov, whose country currently holds the rotating chair of the G-20, told reporters that no emergency plans had been discussed by the group to deal with the potentially catastrophic impact on the global economy of a U.S. debt default.

“We trust the U.S. authorities will find a way out of this complex situation,” Siluanov said. Other finance leaders attending the meeting said they saw the risk of default as remote.