US stocks fall for a 4th day | Inquirer Business

US stocks fall for a 4th day 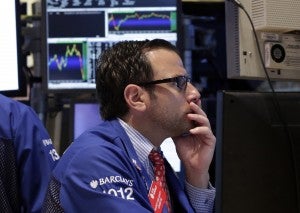 In this Monday, Sept. 16, 2013, file photo, specialist Michel Pistillo works at his post on the floor of the New York Stock Exchange. Mixed economic reports and concern about a government shutdown dragged US stocks lower in the final half-hour of trading. AP PHOTO/RICHARD DREW

NEW YORK—Wall Street couldn’t shrug off doubts about the US economy and government gridlock on Tuesday.

Mixed economic reports and concern about a government shutdown dragged stocks lower in the final half-hour of trading. They had been positive most of the day.

The modest losses extended the losing streak for the Standard & Poor’s 500 index to four days. It was the longest run of declines in a month. The Dow Jones industrial average also dropped for a fourth straight day.

Investors struggled with conflicting news about the economy on Tuesday. One report showed that home prices in July rose the most in more than seven years. Another showed that Americans’ confidence in the economy slipped in September.

Investors are searching for direction after the Federal Reserve’s surprise decision last Wednesday to keep its stimulus program intact. They had expected a reduction in the Fed’s $85 billion in monthly bond purchases. Investors are now parsing economic reports and comments from Fed officials to gauge the central bank’s next move.

Some are also nervous about political gridlock in Washington. They were concerned that the federal government could shut down because Washington lawmakers appear to be making little progress in budget talks.

“A government shutdown starting next week is looking increasingly likely,” said Jim Russell, a regional investment director at US Bank. “That will not be welcomed by the capital markets.”

But Brad Sorensen, director of market and sector research at Charles Schwab, thought that worries about a government shutdown would ultimately be short-lived.

“Investors are becoming a little bit immune to the games that Washington has started to play,” Sorensen said. “Investors with a stronger stomach should probably buy the dip.”

Stocks, for example, plummeted in the summer of 2011 as lawmakers wrangled about raising the debt ceiling. The market also sagged in October last year before the Presidential elections, on concerns that a divided government would be unable to agree on tax reform. Each time though, backed by the Fed’s economic stimulus, the market came back stronger.

Stocks edged lower in early trading before moving modestly higher in the late morning and afternoon. Those gains then fizzled out at the end of trading.

Before the market opened, a survey showed that home prices rose the most since February 2006. A revival in housing has been one of the bright spots for the economy.

In another key economic gauge, the Conference Board, a New York-based private research group, said that its consumer confidence index dropped to 79.7 in September, down from August’s 81.8.

Consumers’ confidence is closely watched because their spending accounts for 70 percent of US economic activity. Confidence has grown since the Great Recession, but it hasn’t hit a reading of 90, which typically accompanies a healthy economy.

They S&P 500 index is just 28 points below its all-time high reached last Wednesday, when investors were initially thrilled that the Fed extended its economic stimulus. Since then, the market has fallen each day as doubts emerge about the outlook for the economy, and budget negotiations.

In government bond trading, the yield on the 10-year Treasury note rose fell as investors bought bonds. The yield dropped from 2.70 percent late Monday to 2.66 percent, its lowest level in six weeks. The yield on the note is a benchmark for rates of consumer loans.

—Carnival fell $2.86, or 8 percent, to $34.54 after the cruise ship operator warned revenue could drop more than its prior forecast.

— Facebook rose $1.26, or 3 percent, to $48.45 after Citigroup upgraded the company’s stock to a “buy” recommendation from “neutral.” Facebook should continue to grow, helped by increasing advertising revenue contributions from its mobile website, Citigroup said.—Steve Rothwell