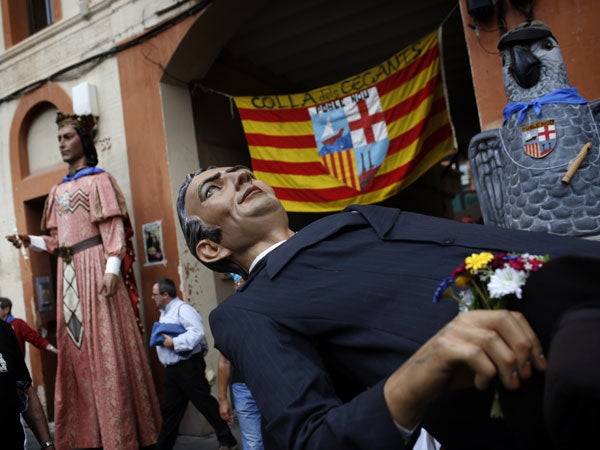 Giant figures are carried out to start a parade in the streets during the last day of the Poble Nou fiestas in Barcelona , Spain Sunday, Sept 15, 2013. A record 8.3 million foreign tourists flocked to Spain in August, with the northeastern region of Catalonia—where Barcelona is—benefiting most, with 2.3 million foreigners heading there. AP

It was the highest monthly number of foreign tourists to Spain since current records began in 1995 and 7.1 percent higher than August last year, the tourism ministry said in a statement.

In Spain, the northeastern region of Catalonia—with its beaches and the cultural sites of Barcelona—benefited most, with 2.3 million foreigners heading there.

Close behind were the nearby Balearic Islands with 2.1 million foreign visitors and the southern region of Andalusia with 1.1 million.

As Spain has struggled through the past two years of recession, with an unemployment rate currently above 26 percent, tourism has been a rare source of positive economic news.

It accounts for 11 percent of the economy, and Spain is the third-most visited country in the world, tied with China and behind only the United States and France, figures from the World Tourism Organization show.

Spain’s surging tourist numbers at the height of the summer holidays in August came most of all from three stronger European economies: 2 million from Britain, 1.8 million from France and 1.2 million from Germany.