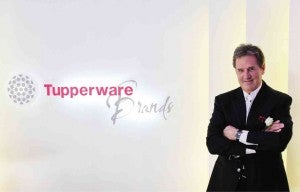 Global direct selling industry leader Tupperware Brands Corp., distributor of such brands as Tupperware, Colour Collection, Wonderbra, Playtex, Hanes and Baby Care Plus, has been on a roll the past seven years.

Over that time, the Florida-based distributor of product lines such as storage solutions, baby products, cosmetics and intimate wear saw its revenues grow significantly quarter after quarter to hit $688 million in the second quarter of this year, from the year-ago level of $639 million.

Net income in the quarter ending June, on the other hand, surged to $76.3 million from just $13 million in the same period last year, and was driven primarily by robust sales in emerging markets.

Tupperware chair and CEO Rick Goings told the Inquirer in an interview that investors have responded positively to the company’s strong financial results with share prices rising dramatically from a low of about $12 a share in 2003 to $85 in recent days.

The dramatic rise in share prices is good news to shareholders, composed mainly of pension funds that intend to keep the money in the multinational company for the long haul.

Tupperware owes this growth primarily to the dramatic take up in Tupperware products in emerging markets where the middle class—the main target market of its wide array of products—is growing and willing to shell out money for new products such as those that bear the Tupperware brand.

Goings told the Inquirer during his recent visit to the Philippines that the company’s future was in the hands of the emerging markets, which include the Philippines, where the company is celebrating its 20th year.

“We are very pleased with our Philippine business. Growth has been double digits so far this year, but I believe we have yet to maximize the opportunities that we have here,” said Goings.

He said the strategy was to double the local business in the next five years, with the “most dramatic” sales to come from the Tupperware products, which now include cookware and food preparation items.

“It is in Tupperware where we have the least competition. We own the space in that product category. It will be tremendous going forward,” he said.

But while Tupperware’s food storage products will remain the “hub” of its local business, Goings said that he sees great opportunities in the “spokes,” which include water bottles and food preparation products such as the handy vegetable chopper.

Goings, who is credited for engineering the dramatic growth of Tupperware’s global operations, said that demand food preparation items would continue to grow as more women join the workforce, and thus would need products that will help them save time in the kitchen.

“Women are now more busy but they still like to prepare food and entertain. Our products will help women save time,” said Goings, who described himself as a strong believer in the growth potential of the Philippines.

“I love this country,” said Goings.

He also said that he would like to see more women in the Philippines find income opportunities in the Tupperware group, explaining that the company has always been about empowering women by giving them a business opportunity that they can easily tap.

“Our business model works and Tupperware has no religious or political cause. What it does is show women how to build a business, feed her family and share good thoughts with other women. It is a really good business,” said Goings.

Goings, who has been in Tupperware for 20 years, said that it is this ability to unleash the potential of women to change their lives for the better that keeps him energized to go to work every day.

He likens Tupperware to the lamplighter who lived in the days before electricity was invented.

“You wouldn’t see him anymore, but the light is there and we believe that we have a light that we can leave behind for women around the world,” said Goings.