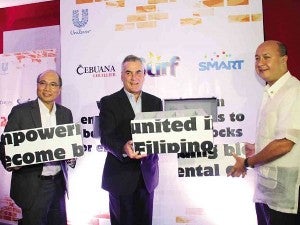 Millions of these sachets, containing shampoo, detergent, coffee, among other items, are sold and produced, but their disposal often poses the biggest problem as far as the environment is concerned. Most of the time, sachets contribute to the worsening solid waste problem in Metro Manila.

Fortunately, companies are taking it upon themselves to help de-clog the country’s drains, by implementing their own waste management solutions.

Unilever Philippines, through its Sachet Recovery Program, has been collecting Surf sachets, which are being converted into cement pavers and donated to various beneficiary public schools nationwide.

Among Unilever’s products, Surf sachets has so far been found to be the most numerous. 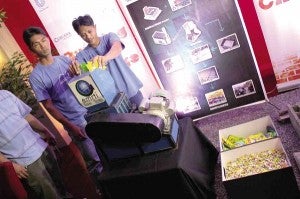 RECOVERED sachets will be grounded and converted into cement pavers, which will then be donated to various beneficiary public schools.

Launched in 2012, the Sachet Recovery Program is one among the various projects of Unilever Philippines under the Unilever Sustainable Living Plan, a global campaign that aims to reduce the company’s environmental footprint while growing its business.

“This is our commitment to reduce our environmental footprint. We understand the impact of our products and packaging so we have looked for ways to reduce the impact,” he explains.

According to Macapagal, they are optimistic of collecting this year more than double last year’s number to around 25 million sachets, on the back of a partnership forged with Smart Communications and Cebuana Lhuillier.

For these three brands, the Sachet Recovery Program is their way of reinforcing their strong commitment to greener living and of empowering Filipinos to become building blocks for positive change. 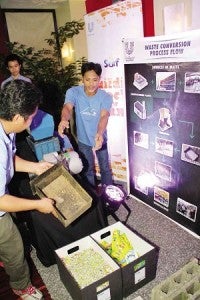 RECOVERED sachets will be grounded and converted into cement pavers, which will then be donated to various beneficiary public schools.

Under this program, end-users are urged to trade their empty Surf sachets at any of the 1,800 Cebuana Lhuillier branches nationwide in exchange for 25 free Smart texts. The joint effort of these three companies, formalized only early this year, allowed more consumers to get involved in building a unique sachet recovery model, making the process easier, convenient and more rewarding for Filipino consumers.

The commitment of Surf, Smart Communications and Cebuana Lhuillier will also aid Unilever in creating scale for its long-term sachet conversion capabilities such as the conversion into other useful items like construction boards and fuel.

“Each Filipino can be a building block for positive change. This is only the beginning of our campaign for cleaner, greener living,” notes Unilever Philippines chair and CEO Peter Cowan.

“We have a role to play—to recover all sachets and that will create impact. We urge all of you to keep going—to reduce your impact or footprint,” Cowan adds.

For Cebuana Lhuillier president and CEO Jean Henri Lhuillier, this massive sachet recovery program does not only address the country’s challenges on waste, but it also encourages Filipinos to take a positive action to have healthier surroundings.

Smart chief wireless advisor Orlando B. Vea meanwhile notes that the Manuel V. Pangilinan-led company is “grateful for the opportunity to contribute to this Unilever initiative through the use of Smart SMS service as a means to reward customer participation in a worthwhile cause.”

Since the three companies formalized their partnership earlier this year, the sachets collected had so far been converted into 30,000 cement pavers to be donated to 30 beneficiary public schools. These include the Ilaya Elementary School in Tanay, Rizal; Dualtech Center in Canlubang, Laguna; Candau-ay Elementary School in Dumaguete; and Balulang National High School in Cagayan de Oro.

These cement pavers, which can replace a portion of sand and gravel in a cement mix, can be used for different purposes including for roads and building various infrastructure. To have 1,000 pavers, roughly 800 kilos of sachets will be needed.

Who is Ducielle Suarez Cardema of Duterte Youth?