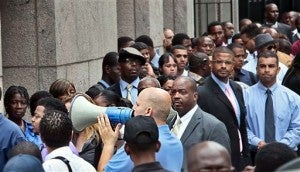 In this Thursday, Aug. 8, 2013, file photo, applicants listen to a speaker’s bull horn instructions for attending a combined Metropolitan Transportation Authority and Harlem Week job and career fair at Columbia University in New York. The Labor Department reports the number of Americans who applied for unemployment benefits for the second week of September on Thursday, Sept. 12, 2013. AP

WASHINGTON — The number of people seeking U.S. unemployment benefits plummeted last week by 31,000 to a seasonally adjusted 292,000. But the drop was mostly because of technical issues in two states that delayed the processing of applications.

The Labor Department says the less volatile four-week average fell to 321,250, the lowest in six years.

A department spokesman says the steep drop occurred because two states upgraded their computer systems last week and did not process all their applications. “This is not necessarily an indication of a change in labor market conditions,” he said. He would not identify the states.

Even so, prior to the glitch, applications had dropped 7 percent in the previous three months.