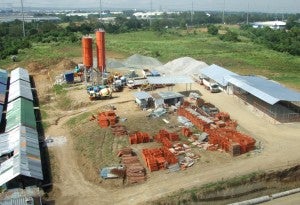 The Calabarzon regional government center under construction by MTD Philippines in Calamba, Laguna. The Alloy MTD Group of Malaysia, through local unit MTD Philippines, is set to invest about $280 million (roughly P12 billion) in 10 run-of-river mini-hydropower plants in Isabela starting this year. PHOTO FROM MTDPHILIPPINES.COM

On the sidelines of a networking reception hosted by the Malaysian Embassy in the Philippines, Patrick Nicholas P. David, head for business development at MTD Philippines, said these power projects would have capacities ranging from 5 megawatts to 19 MW, for a total of 80 MW. The company is expected to spend an average of $3.5 million to produce a megawatt of power from hydro resources, he added.

“We already have four (renewable energy) service contracts out of the 10 that we have applied for. The feasibility studies for all the 10 sites have been prepared so we’re just waiting for the Department of Energy to issue the service contracts for the six remaining sites,” David said in an interview with the Inquirer.

According to David, the company is targeting to break ground within the year for the first 19-MW mini-hydropower project, which may take about two years to complete and commission.

“We have consultants. Studies have been prepared, we have conducted our due diligence, and now we’re about to select our EPC (engineering, procurement and construction) contractor. Our consultations are now drawing up the terms of reference for the EPC contract, the bidding for which is targeted for this year,” David said.

A large portion of the electricity to be generated by the company will be supplied to an electric cooperative in Isabela while the excess may be sold to the wholesale electricity spot market.

David further said that the agreed power generation rate with the electric co-op was the same as the approved feed-in-tariff rate for hydropower projects, which was P5.90 per kilowatt-hour.

In another development, David said MTD Philippines was expected to complete by December this year the first building under the planned P2.5-billion regional government center in Calamba, Laguna.

This project, David explained, would put together in one area a number of key regional government agencies assigned to the Calabarzon area, similar to Malaysia’s Puttrajaya, where state offices are located in a central area.

The planned center, he added, would serve as a one-stop shop that would allow better coordination among government agencies and help ease doing business for those investing in the region.

Alloy MTD’s planned regional government center occupies a 3-hectare area that will host four buildings that can accommodate about 5,000 government employees. These buildings, which will have five to six floors each, will have a gross area of 70,000 square meters.

If the government agencies cannot fill up the whole area, Alloy MTD is planning to offer the space to business process outsourcing companies.

The whole regional center is expected to be completed by 2016.

Read Next
Insurance products readied for Philippine farmers
EDITORS' PICK
Enjoy the best of city living at SMDC’s Fame Residences
Step up your vlog game with vivo’s newest smartphone
EDITORIAL: Solo parents deserve more
Guanzon: Senator behind delay in Marcos DQ case
No more need to quarantine foreign arrivals if fully vaxxed
NUSTAR Resort and Casino: Cebu’s next lifestyle and leisure gem
MOST READ
Guanzon to Bongbong Marcos camp: How do you know I had ‘minority opinion’ on DQ cases?
Guanzon gives Ferolino until Monday to release reso on Bongbong Marcos’ DQ cases, or else
Guanzon: Senator behind delay in Marcos DQ case
Marcos a no-show in another GMA interview
Don't miss out on the latest news and information.