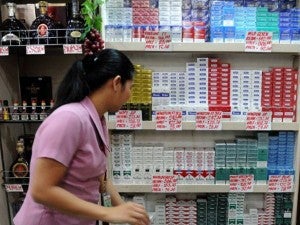 A vendor sells cigarettes at a supermarket in Quezon City. AFP FILE PHOTO

MANILA, Philippines—Despite the passage of the sin tax law, the prices of cigarettes in the Philippines remain among the lowest in Southeast Asia, an antismoking group said yesterday.

Emer Rojas, president of New Vois Association of the Philippines, said the first edition of the Association of Southeast Asian Nations (Asean) Tobacco Atlas showed that the country continued to have one of the lowest prices of cigarette products in the region and even in the world.

“For example, local brand Fortune is pegged at 58 centavos and Marlboro at $1.16 a pack. But in Singapore, which is one of the Asean countries with good tobacco control policies, a pack of Marlboro is sold at $9,” said Rojas, a laryngeal cancer survivor.

He said the Philippines had been lagging behind her Asean neighbors in terms of tobacco control so that even with the sin tax law approved last year, the price increases were still not enough to catch up with her counterparts in the region.

“We were only able to achieve a tax burden of 53 percent of the retail price. This is still short of the recommended 70-percent tax burden of the World Health Organization (WHO),” Rojas said.

So far, only Singapore has complied with the WHO recommendation while Thailand’s tobacco tax rate is at 69 percent, he said.

Released by the Bangkok-based Southeast Asia Tobacco Control Alliance (Seatca), the Asean Tobacco Atlas is the first ever publication that details the tobacco epidemic in the 10-member association.

Rojas said 10 percent of the world’s tobacco consumers, or 127 million adults, are found in the Asean region with the majority in Indonesia (65 million). The Philippines comes in second with 17.3 million smokers.

An estimated 9.25 billion cigarette sticks are consumed by Asean smokers on a daily basis, according to Seatca.

According to the Tobacco Atlas, Filipinos spend an estimated P326.4 million on cigarette products every month. Despite the huge expenditure on cigarettes, the government allots only P11.45 million to tobacco control.

Rojas said that aside from imposing higher taxes on cigarette products, the government should work on getting approval of the graphic health warning law to help curb the country’s tobacco epidemic.

“We know from the experience of our Asean neighbors like Singapore and Thailand that high tobacco prices and huge picture-based warning labels are effective measures in reducing consumption and discouraging the youth from taking up smoking,” he said.