How much shelter can P10B build? | Inquirer Business

How much shelter can P10B build? 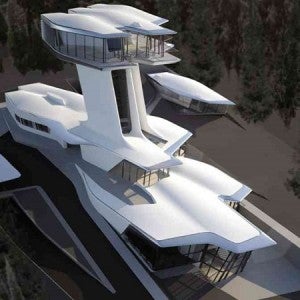 ZAHA Hadid designs a spaceship-like mansion for supermodel Naomi Campbell and her billionaire boyfriend Vladislav Doronin, who is not a lawmaker, but rather, a real-estate tycoon. The 2,650-square-meter house was built at an undisclosed cost, but estimates certainly run up to the millions of dollars and to billions in our currency.

One of my kasambahays, who is very industrious and quite smart for someone with very little education, just asked for a few thousand pesos in financial assistance in order to fix the roof of their home back in the province. What a stark contrast I thought, to Janet Lim-Napoles’ supposed runaway money of P10 billion, and her need to maintain 28 houses.

For many, the value of P10 billion is incomprehensible. And for the majority, P10 billion is near-mythical, a sum that could only exist in the imagination. As I write this, I work the numbers on a calculator that doesn’t even have enough space for so many zeros. And news broke out that Napoles has turned herself in.

When I hear of some incredible figure like P10 billion, I have the tendency to associate it with the many things it can buy. Top of mind is my food budget for the month. Second would be tuition for the school year. Then come other figures: How many cars? How big of a house? How many months worth of salary for the house help? Then it translates to my work-related sums: How many model units can it fit out? How many square meters of mall space can it build? How many years worth of professional design fees can it pay?

Not a very bad joke

Life is hard, and for people like me who’ve worked tooth and nail for everything we have, the Priority Development Assistance Fund (PDAF) scandal won’t even qualify as a very bad joke. I wonder if the lawmakers know what they all look like from this point of view.

Ten billion pesos will build you a total of 80,000 square meters of floor area for a high-end home. That would be with luxurious finishes like Italian marble for the bathrooms, solid wood floors, some wood paneling here and there, and top-notch imported furniture. The type of house the likes of Napoles and her buddies would like to have, but will not necessarily work hard for. That’s approximately 80 homes with 1,000 sq m of luxury living space each.

Ten billion pesos will buy you roughly 15 of the medium-scale houses in the posh Forbes Park, likely a 3,000-sq-m plot with a 900-sq-m house. Yes, 20 of them that are not the larger ones by Forbes’ standards. It can also buy you around 90 of the smaller houses and lots in the other prime Makati Villages.

For the upper middle class that give their children private school education and manage a few luxuries, P10 billion can build 250 houses with a floor area of 500 sq m each, on a 500-sq-m lot within a gated community.

For those with a little less, P10 billion can build 700 small homes, say a 300-sq-m house on a 350-sq-m lot, not too fancy in quality, but with very decent finishes: concrete and hollow block construction, local marble for floors, homogenous tiles in bathrooms and long span roofing.

For those with even less, P10 billion can buy  4,000 studio units at any of the condos coming up in the metropolis. Yes, 4,000 units of the most popular condo size our OFWs (overseas Filipino workers) have been toiling overseas for, to invest in property and finally have their own small home.

On the grassroots level—the class that’s supposed to be the largest beneficiary of the bogus nongovernment organizations (NGOs)—my kasambahay say that it costs somewhere between P30,000 and P50,000 to build their small home on a farm plot in the province. Ten billion pesos could build 200,000 homes. It could have replaced many of the homes in Pampanga and Mindanao that were washed away by monsoon floodwater. It could have built homes in the relocation sites for the city’s illegal settlers. With the same amount of money, we could build 3,000 schoolhouses or nearly 2,000 small hospitals all over the country.

Mulling over what else P10 billion could build, I get flashes of high-rise residential blocks, shopping malls, hotel and casino complexes, and hospitals.

So, as Napoles has now been arrested, I’m eagerly awaiting her story on the bogus NGOs and her bogus friends in government. Meanwhile, I’m going to be pulling out some cash for my inday’s roof, and will be buying a better calculator so I can toy around with the figures of the PDAF. So many digits. And this is supposed to be just the tip of the iceberg.