Philippine economy seen to have grown 7.2% in 2nd quarter 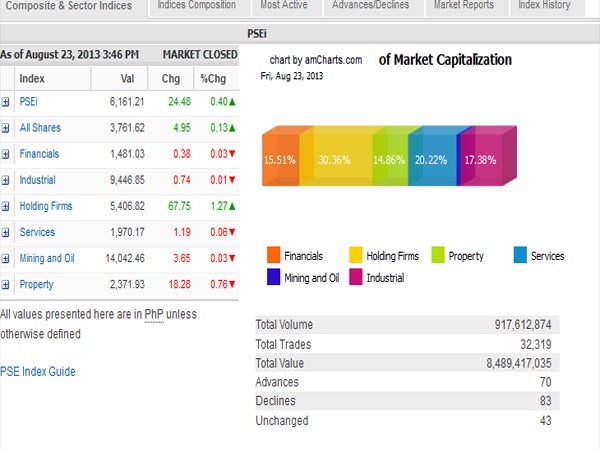 Philippine Stock Exchange index, as of August 23, 2013. Screengrab from http://www.pse.com.ph/stockMarket/home.html

MANILA, Philippines – After growing faster than target in the first quarter, the Philippine economy is again expected to have posted a robust growth in the second quarter.

Moody’s Analytics said the Philippines, driven by domestic demand and a consequently healthy performance of the manufacturing sector, likely grew by 7.2 percent in the second quarter from a year ago.

Should the forecast be realized, the first half growth of the Philippine economy then averaged at 7.5 percent. In the first quarter, it grew by 7.8 percent.

The government has set its economic growth target for this year at a range of 6 to 7 percent.

“Manufacturing is growing at a healthy clip, driven entirely by domestic demand… Our tracking model suggests that GDP growth was only slightly weaker in the second quarter [compared with the first quarter],” Moody’s Analytics said in an outlook report released on Monday (August 26).