Century Properties nets P1B for first half of 2013 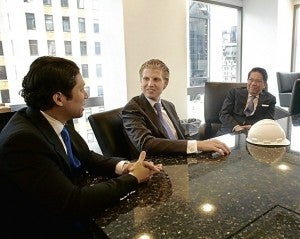 For the second quarter alone, CPG posted a net income of P555 million, 14.1 percent higher than the level a year ago. This was on the back of a 9.6 percent year-on-year increase in revenues to P2.69 billion.

For the six-month period, revenues went up by 7.2 percent to P5.29 billion.

“These strong financial results have allowed the company to grow the business on all fronts. The sustained momentum in residential sales drives the completion and delivery of Century projects every few months. It also paved for our foray into the recurring income business and acquire properties in strategic locations for new development projects,” CPG said in a statement.

Meanwhile, earnings from the company’s property management arm, Century Properties Management Inc., grew by 26 percent in the first half to P138 million from the same period last year.

As an indicator of future earnings growth, CPG reported P12.1 billion in pre-sales take-up for the first half, reaching more than 50 percent of the full year target.  This was attributed to brisk sales from projects in Century City in Makati, Azure Urban Resort Residences in Parañaque City, Acqua Private Residences in Mandaluyong City and the Residences at Commonwealth in Quezon City.

CPG aims to hit P30 billion in pre-sales and P3 billion in net income by 2015. The company added that it’s on course with its plan to grow its recurring income with the opening of the P1-billion Century City Mall by yearend, as well as the building of new office towers in Fort Bonifacio and Makati, which CPG said would be announced in the coming months.

Meanwhile, CPG reported that cash flow from operations or earnings before interest and taxes, amounted to P191 million for the six months ending June.

The company spent P4.6 billion for capital outlays in the first six months, on track to meet its P8-billion capital expenditure budget for the full year.