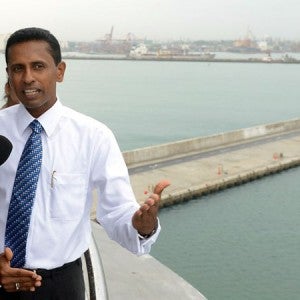 Sri Lanka Ports Authority Chairman Priyath Bandu Wickrama speaks to reporters at the new Colombo South Harbour, announcing a 1.4 billion USD plan to reclaim land next to the port and build a new port city, in Colombo on July 24, 2013. Sri Lanka has signed a deal with a Chinese company to build a new $1.4-billion city complex on reclaimed land near the harbour of the capital Colombo, a top official said July 24. AFP

The massive terminal in Colombo is located mid-way on the lucrative east-west sea route and has facilities on a par with Singapore and Dubai.

The Colombo International Container Terminal (CICT), which is 85 percent owned by the state-run China Merchant Holdings International, is designed to handle mega ships — a first for Sri Lanka which is aiming to become the region’s shipping hub.

The involvement of such a large Chinese company appears to conform to a pattern by Beijing after it sealed a deal in January to acquire the Pakistani port of Gwadar at a time when it is also building a $14 million “dry port” in the Nepalese city of Larcha, near Tibet.

Chinese loans and expertise were also instrumental in the construction of a new $450 million deep-sea port at the southern Sri Lankan city of Hambantota which opened in June 2012.

Independent shipping expert, Rohan Masakorala, says the new terminal made economic sense for China to tap in to the growing South Asian container cargo and gave Beijing a foothold along a strategic sea route.

“Terminal investments are a good business which can give a very good return,” said Masakorala, a former secretary-general of the Singapore-based Asian Shippers Council.

“Through this investment, China is also securing the safety and efficiency of their main supply chain.”

Masakorala, who heads the Shippers’ Academy Colombo, said about half of all world sea trade passed through the east-west shipping route and a presence at a mid-way point along that gives China a commanding position.

“For China to maintain economic growth at home, they also need to go out and secure their supply routes. In that sense, coming to Colombo is a strategic commercial investment.”

The Chinese investment in Sri Lanka, which is under pressure from Western powers and India over its human rights record, has raised fears in New Delhi about Beijing’s influence in the neighbourhood.

But Priyath Bandu Wickrama, chairman of the state-run Sri Lanka Ports Authority (SLPA), insisted that India had nothing to fear from the new Colombo port and could in fact be a major beneficiary.

“We will not allow any military base at our ports nor will we allow them to be used for any strategic military purpose by anyone,” Wickrama said.

Wickrama said shippers in India could save up to four days by routing their cargo through Sri Lanka rather than using Singapore or Dubai.

“Earlier, Indians along the east coast had to send their cargo to Singapore if they wanted to catch a mega ship going West. Now these mega ships will be going through Colombo and picking up Indian cargo,” he told AFP.

“That saves time and a lot of money.”

The two major ports of south India, the Port of Cochin and the Port of Tuticorin, are too shallow for mega vessels such as the world’s largest container ship, the MV. Maersk Mc-Kinney Moller.

Saliya Senanayake from the London-based Chartered Institute of Logistics and Transport says that “India is about five to six years behind Sri Lanka when it comes to port infrastructure”.

Sri Lanka has been an important stop in the ancient Silk Sea Route and today hundreds of ships pass its southern coast daily while plying the world’s busiest international shipping lane.

With a capacity of over 18,000 containers, the M.V. Maersk Mc-Kinney Moller, which was commissioned about two weeks ago is expected to make up a fleet of 20 mega ships in the next two years plying the East-West route.

The SLPA is pouring millions of dollars into infrastructure around the island and says it is on course to increase container handling capacity by 1.6 million containers to 6.4 million by April.

It hopes to have a container capacity of 10 million by 2020, while revenue is forecast to triple to one billion dollars by 2020.

Hambantota, which is just 12 kilometres (7.5 miles) away from the East-West sea lane, is being promoted as a key service centre and industrial port where large ships can re-fuel or take on fresh food.

In April, Colombo’s port is due to open another mega terminal just next to the Chinese-managed CICT. The new addition will initially be able to handle about 800,000 containers a year, according to the SLPA.

“In the presence of Somalia pirates, it is safer for ships (from the Far East to Europe) to stop over at Sri Lanka and head to Cape of Good Hope, without calling at Dubai port,” he told AFP.

Read Next
Firms help immigrants obtain US citizenship
EDITORS' PICK
Pre-order the new vivo Y20s [G] to get a free TWS earphone
In good spirits: SMDC helps farmers and residents through Kadiwa Market
DSWD chief admits ‘slow start’ in distribution of aid in ‘NCR Plus’
65% of Filipinos say Duterte’s health should be made public – SWS
Smart three-peats as country’s fastest mobile network – Ookla
Would the military allow me to stay this long if I’m inutile? – Duterte
MOST READ
Vico Sotto frets getting photos of ‘butt vaccination’ from Pasig dwellers
Metro Manila to have shortened curfew hours from 8 p.m. to 5 a.m. under MECQ
San Miguel Corp. continues to invest heavily in the Philippines’ future
COVID-hit Roque slams ‘un-Christian’ query on how fast he secured hospital bed
Don't miss out on the latest news and information.