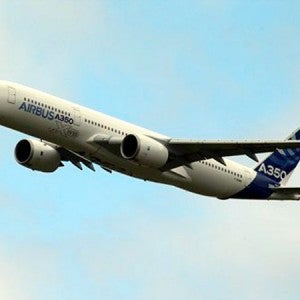 The June 21, 2013 file photo shows the new Airbus A350 jet liner flying above the Bourget airport during the 50th Paris Air Show at Le Bourget airport, north of Paris. Automaker Daimler AG is reporting a big jump in net profit in the second quarter thanks to gains from selling its stake in aerospace firm EADS. The company said Wednesday, July 24, 2013 that net profit rose to euro 4.58 billion (US$ 6.04 billion) from euro 1.56 billion in the same quarter a year before. AP

PARIS — European aerospace group EADS is to change its name to Airbus and shake up its corporate structure as part of push to give its civil aviation division more prominence.

As well as the name change next year, European Aeronautic Defense and Space Co. will reshuffle its space and military units into one division, the company said Wednesday. It also unveiled a 31 percent increase in first-half net profits on the same time last year to 759 million euros ($1 billion).

EADS says the changes will “enhance integration and cohesion” of the 13-year-old group formed from the French, German and Spanish aerospace companies.

In the first half, the Airbus unit took in 722 net orders in the first half, up from 230 a year earlier. The civil aircraft business still accounts for almost 70 percent of EADS’ group sales.

EADS had once sought to become less dependent on its civil aircraft business with a goal of growing its defense business, maker of the A400M European freighter, to around half of total revenue. Those plans were shelved with the global economic downturn and government belt-tightening.

Under its new organization, a new defense entity will be created dubbed Airbus Defense & Space, housing the existing military business along with satellite maker Astrium and drone and electronics business Cassidian.

The Eurocopter civil and military helicopter business remains separate in the new organization but is renamed Airbus Helicopters.

EADS chief executive Tom Enders called the changes “an evolution, not a revolution.”

“We affirm the predominance of commercial aeronautics in our group and we restructure and focus our defense and space activities to take costs out, increase profitability and improve our market position,” Enders said in the statement.

Airbus delivered 295 civilian planes in the first half, just less than the 306 record by arch-rival Boeing. At last month’s Paris Air Show, Airbus took in firm orders for 241 aircraft including 65 for its A350 widebody.

The A350 is still undergoing testing, but is expected to enter into service in the first half of next year. It made its first fly-by over Le Bourget air field during the air show last month. On Wednesday EADS said the program “is now entering the most critical phase” and that it “remains challenging.”

“Any schedule change could lead to an increasingly higher impact on provisions,” EADS said.