What goes into your electricity bill? | Inquirer Business

What goes into your electricity bill? 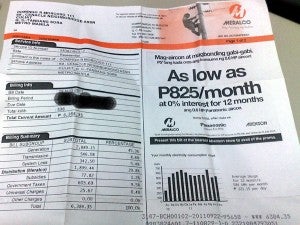 All the elements affecting monthly charges are reflected on the itemized part of a consumer’s electricity bill. FILE PHOTO

MANILA, Philippines—With the recent hike in Meralco’s rate, consumers are now asking just what it is that goes into their electricity bills, and how power rates are set.

The biggest factor—all 58.2 percent of it—is the generation charge or cost of electricity sold by power producers, which distributor Manila Electric Co. (Meralco) said grew by P0.19 per kwh to P5.66 per kWh for June 2013 compared with the previous month.

Still, this is 48 centavos lower than the generation charge in June 2012.

Transmission charges, which take up 10.1 percent, went up by P0.02 per kwh on higher service charges incurred by the National Grid Corp. of the Philippines from generators. Taxes, which take up another 10.1 percent, increased by P1.50 per kwh. System losses take up about 5.4 percent of the total charges and the rest, or 16.2 percent, go to Meralco.

Meralco assistant vice president and head of utility economics Lawrence S. Fernandez says in a recent media orientation that all the elements affecting monthly charges are reflected on the itemized part of a consumer’s electricity bill.

Fernandez admits it is very hard to explain why there are system losses, which result from energy facilities turning out slightly less output compared to how much input, namely fuel, is used.

“In every system, in every country, there are system losses. What we can do about it is reduce the system losses as much as possible. We have to understand, however, that investing in efficiency comes with costs, too, for us and for the consumer. We try to balance these factors,” Fernandez says.

The government has, in fact, set in R.A. 7832 how much can be charged for system loss in order to encourage energy efficiency, and such levels get more strict over time, Fernandez says.

“In the past 10 years before 2008, there were a lot of system losses. There was a P10 billion equivalent of out-of-pocket for the 10 years that Meralco was above cap for system loss. Thankfully our system losses have come down. The customer benefits because, by law, we have to reflect the system loss charge based on the cap or the actual figure, whichever is lower for the customer,” Fernandez says.

From 2008 to 2012, savings to consumers due to lower systems losses have reached P8.7 billion, he points out.

And just how does Meralco charges fare with those of power distributors in other countries? Responding to the Joint Foreign Chambers of Commerce allegation in October 2010 that the Philippines had the highest residential electricity rates among seven Asia countries covered, and the second highest in industrial rates among eight countries, Meralco asked the study’s source, Perth-based International Energy Consultants (IEC), to unbundle the components of each country’s electricity charges and compare them using a common time frame.

The result: A 2012 study by the same consultancy firm showed the Philippines ranked ninth of 44 countries surveyed (regionally, No. 2 in Asia after Japan) and had “the most unbundled” or itemized rates (as reflected in the monthly bill) in the world.

The same report showed that Meralco’s tariffs reflect the true cost of power in the country. This, IEC says, “is sound economic policy in a high-growth market such as the Luzon grid.”

While Meralco’s tariffs are higher than those of Taiwan, South Korea, Thailand, Malaysia and Indonesia, the study says this was because of government subsidies for customers and/or utilities in these markets.

Tariffs in those countries “remain well below the cost of supply.” Indonesia, for example, provides fuel subsidies to the local utility.

Others allow deferred capital expenditures, financing operations through debt, and/or direct cash infusions into the utility from the government.

This, IEC says, is unsustainable since the government and/or the utility firms cannot indefinitely incur losses and customers in such subsidized markets are likely to suffer extreme price shocks when the subsidies are removed.

Meralco is working on this, he says, by securing new competitively priced power supply agreements up to 2019, supporting power capacity buildup and the use of fuel efficient systems, seeking more cost competitive fuel sources (coal, natural gas, and LNG), working with industry for synchronized maintenance turnarounds of generation facilities, and advocating time of use (peak and off-peak) rates for high load customers.

Meralco has also set flat distribution charges until 2015 (although this takes up just 16.2 percent of total monthly charges) and invested in further system improvements, among other steps, Fernandez says.