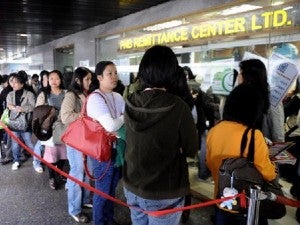 Filipino domestic helpers line up to send money at a remittance center in the central district of Hong Kong in this 2008 file photo. Remittances reached a five-month high in May 2013 as overseas Filipino workers continued to send more money home to their families, data from the Bangko Sentral ng Pilipinas showed. AFP/TED ALJIBE

The BSP on Monday said cash remittances reached P1.867 billion in May, up 5.3 percent over the same month last year. This was the highest level since December 2012 when OFWs sent home $1.975 billion in cash to the Philippines.

The increase in remittances in May was in line with the government’s full-year growth forecast of 5 percent. Remittances are the economy’s largest source of foreign exchange income which, apart from fueling domestic demand, ensure the country has enough dollars to cover import needs.

Personal remittances, which include gifts and other products sent home, rose to $2.07 billion, up 6.2 percent from last year.

The BSP cited the latest reports from the Philippine Overseas Employment Administration, which showed that one-third of the 431,394 approved job orders since the start of the year had already been processed.

Tetangco also cited efforts of banks and nonbank remittance service providers to expand their international and domestic market coverage, which has supported the growth of inflows.

Remittances in May brought the five-month total to P8.78 billion, or a growth of 5.6 percent over the same period last year.