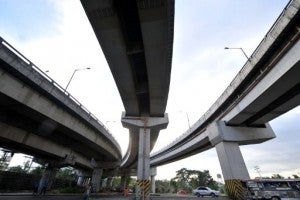 The South Luzon Expressway Skyway (in photo) will be linked to Naia Terminals 1, 2 and 3 through the Naia Expressway, whose Phase II-A is expected to start construction next January. AFP PHOTO/NOEL CELIS

MANILA, Philippines—The groundbreaking and civil works of Phase II-A of the P15.5-billion Ninoy Aquino International Airport Expressway (Naia) project can be expected to start next January, the Department of Public Works and Highways said on Wednesday.

The DPWH said it is now working on the detailed engineering design for the project, which will “supplement the completed Phase I, which interfaces with the Manila South Luzon Expressway at Sales Interchange,” and is programmed for completion on March 2015.

The DPWH said the construction of the project’s Phase II-B, which will run from the Domestic Road to Naia Terminal 3, is scheduled to begin in April 2014 and is expected to be completed in September 2015.

The Naia Expressway is a 7.15-kilometer, four-lane road that is being developed around Metro Manila’s existing network of expressways. It will link Naia Terminals 1, 2 and 3 to the Skyway in the South Luzon Expressway (SLEx), the Manila-Cavite Expressway (Cavitex) and the Entertainment City casino complex in Parañaque City.

On July 8, the DPWH and SMC signed a concession agreement, exactly one month after SMC made an upfront payment of P11 billion for the project.

The amount, which the DPWH promptly turned over to the National Treasury, represented the “government’s share in revenues for the project’s 30-year operation and maintenance concession period,” the DPWH public information office said.

The project, approved on May 30, 2012, by the National Economic and Development Authority (Neda), includes the construction of a 2.2-km road going to the Entertainment City on reclaimed land facing Manila Bay.

The government will finance the project’s right-of-way acquisition costs amounting to P2.25 billion.

According to Public Works Secretary Rogelio Singson, the project “exemplifies the extreme support and confidence of the private sector in helping pursue the development infrastructure plans of the government through the public-private partnership program.”