Road safety lessons you need to teach your kids 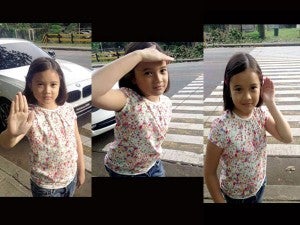 Teach kids to stop… look and… listen before crossing the road.

Remember that television commercial in the late ’80s with the line that goes, “Sa mata ng bata ang maling halimbawa ay nagiging tama” (In the eyes of a child a wrong action of an adult becomes right), and another where there are two kids playing with toy cars and one of them goes, “Paglaki ko, gagayahin ko tatay ko” (When I grow up, I’m going to be just like my dad.)?  The dad happens to be a reckless jeepney driver and, to add drama, somebody comes and says “JR, naaksidente tatay mo!” (JR, your dad got into an accident!) Those ads were really effective in getting the message of how important your actions are in molding the future generation across.

Nowadays, parents are more conscious on how their actions affect their young ones as leading by example has always been one of the best teaching tools. It is not just limited to manners and behavior, it also applies to road safety.  What kind of motorist or road user do you expect your kids to be when they grow up when in their formative years they see you beating the red light, racing on the street or populated area without a thought and mind to the safety of the pedestrians, fellow motorist and, worse, allowing them to ride the car without a proper car seat?

We still see this negligence every day; the worst of all are those done by people who should have known better. So how do you make sure that the next generation of motorist will be better than us? Our example as a more disciplined road user plus exposing them to the concept of safety at a young age can be effective ways in solving our road safety problems. Here are some road safety tips you need to teach your kids.

1) Teach your kids how to cross the road. Even though your kids are chauffeur-driven and escorted by a house help or yaya everywhere, you still need to teach them how to properly cross the road in case of an emergency or when they slipped pass your sentinels and go off on their own.

a.) Put emphasis on crossing at the pedestrian lane and follow the pedestrian light. Teach them how the light works; show and explain to them that even if people are not always following the pedestrian light, this does not mean they should also do so. Use as your closing argument: “If your friend jumps off the cliff, will you jump also?”

b.) Stop, hold hands, look to your right and left, and listen. Play a game that will teach your kid to make it a habit to check before crossing the sidewalk. Try singing or chanting the words while doing it and, when the time is right, let your child decide when is it safe to cross.

2) Teach your kids about the road signs and stoplight. There is a link of a printable version of the traffic signs at www.chicdriven.com/wordpress.  After teaching them the signs, you can play “I spy” with them while on the road to further enhance their understanding.

3) Tell your kids that driving is a privilege and not a right at a young age. When you adopt this mentality, it would be easier to justify why your kids have to wait to be worthy to have a car. This would also help in dealing with peer pressure. Once they break a rule, you can always take it back and they would need to work to get it back. Also make your kids experience how hard it is to commute three to four years before they become 18. By the time they are college, they will appreciate having the ride more.

4) Road rage is for losers. I know it’s hard to maintain your cool when traffic is really bad. Here is a thought that can help stay in the zen zone. Your kid had a fit of road rage and was shot by someone who has a bigger issue. I believe this scenario will work. Exaggerate or explain well to your little one how to show respect to fellow motorist, by being courteous and by giving way. When there is a gridlock, don’t move forward and lock heads (or bumpers) with the rest of them. Assess the situation on how you can be part of the solution not another caveman on the road.

a.) Don’t pass in between parked cars or vehicles. A few years ago, there was this reported incident involving two grade-school kids who died when passing in between two parked vehicles. A car hit one of the parked vehicles that resulted to the car moving forward and crushing the kids who were crossing. Vehicles may block your line of sight, leaving you unable to see the incoming traffic. Because of the kids’ size, the incoming car might have a hard time seeing them as well.

b.) Always go down on the side where the sidewalk is. You could start this practice by activating the child lock on both doors of the back seat. You or your passenger can control where the child can exit to inculcate the habit of looking and going down on the right side. Once you see that your child gets the gist of it, try it a few times in front of your house. But be on the standby. And never leave a young child unattended when getting off the car.

c.) Always pass in front of a vehicle. There is a chance that the driver might not see you or young kids, especially when you pass at the rear of the vehicle. Before crossing, teach your kids to maintain eye contact with the driver or to get their attention, and make sure they are aware that they will be crossing.

6) Follow traffic rules, even if nobody is there. When there’s nobody in the intersection, you are tempted to just go and ignore the red light.  This simple contradiction can create a ripple effect, which can encourage kids to ignore the “right thing to do.”

7) Buckle up. My kids carpool with some of their friends from the village. One of our strictest rules is that if the driver reports that they’re being rowdy or refuse to belt up, we will cancel the carpool. We also gave strict instructions to the driver that if the kids are not belted, the car will not move. If this action results to them being late, thus getting a violation report from school followed by them being grounded, then it just makes it more effective because they will know that their actions will have consequences.

8) Follow the speed limit. My daughter is a built-in speed gun. One of the things she learned from attending one of her dad’s road safety seminar is that when she goes over the speed limit by even just 5 kph, her stopping time becomes longer, which can result to hitting a pedestrian. Thus she always checks the speed limit of the road and asks if we are following.

9) Use the proper safety equipment. For example, require them to wear at least a helmet when riding a bike. Add the elbow and kneepads for younger kids. This will create awareness and acceptance of the use of helmets and other safety gears.

We never said it was going to be easy but if we can give our kids a fighting chance that they might have safer roads and disciplined drivers, then it’s going to be all worth it.