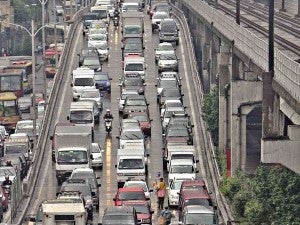 EDSA is now called the biggest parking lot in the world

Servicing no less than 350,000 vehicles and millions of people, Edsa is the country’s main artery, so it’s important to our economy, our government and our citizens. And yet nobody seems to be ensuring that all is well. Admittedly, the Metropolitan Manila Development Authority and the Department of Public Works and Highways have plans of improving the Edsa situation for the long term. But the real problem is that the MMDA, the DPWH and all other government agencies concerned just seem overwhelmed. They keep drawing up plans to improve it, but these never get past the drawing board. Or as my friends say, “Panay drawing lang (It’s always just a plan).”

While I do believe that Edsa’s traffic flow has improved significantly and noticeably over the past few years, I think the powers-that-be need to centralize Edsa’s traffic management to one person, whose only job is to ensure that traffic in Edsa flows freely at all times, always safe and  free from any obstruction or debris which can hamper the flow of traffic. A person who can make snap decisions and be man enough to take on the voodoo magic/curse that he/she will get should he/she make the wrong decisions in managing Edsa’s traffic.

First, let’s look at the choke points of Edsa, from a north-south flow:

1.) Balintawak. When the Smart Interlink Road that cuts across access to North Luzon Expressway, bypassing Balintawak District, was opened a few years back, motorists sighed a great relief. Balintawak, with its markets, is so congested, not because of the sheer volume of roads, but because of the markets squatting onto Edsa itself. On a bad day, only two of six lanes are passable on the southbound lane as the rest become temporary market stalls, or parking for delivery vehicles and market-goers.

2.) SM North Edsa/Trinoma Mall U-turn slot. Again another choking point; ideally a whole slew of traffic officers should man this area and force cars to move swiftly and observe proper lane discipline so as not to block northbound and southbound traffic.

3.) Kamuning. After a short reprieve, motorists experience another choke point as cars hit the Kamuning District with its confusing lower road network, especially under the Kamuning flyover.

4.) Cubao. The Cubao District arguably is the worst choke point in Edsa’s entirety. The biggest problem here lies in the various bus terminals. The feeder and secondary roads that house the bus stations and terminals where buses can take  forever to maneuver in and out  essentially block as much as half of Edsa’s traffic. Terminals for other public utility vehicles are populous as well, catering to commuters of taxis, jeepneys, tricycles and shuttles. All of these make Cubao Metro Manila’s busiest, biggest and, admittedly, most important transportation hub as the Edsa-MRT3 and LRT2 stations intersect here. Throw in also the fact that Cubao is a marketplace, which makes things far worse.

If Cubao is jampacked, traffic coming from the south  can stretch all the way back to the SM Megamall/Shangri-La area and Kamuning on the other end. Also, the vast majority of passengers of the MRT from north to south and vice versa  get off at Cubao station. I know this because I ride the MRT3 fairly regularly.

5.) Edsa-Ortigas Interchange. After Cubao, Edsa-Ortigas is a nightmare people need to contend with. The main problem here is, again, the buses cramming their way into the tight service roads beside the flyovers. The service roads, particularly on the southbound lane are very bad, which slows down traffic further.

6.) Guadalupe. The Guadalupe District is, particularly for northbound motorists coming from the south and Makati Central Business District going towards the Ortigas and Greenhills CBD, the most irritating. The old ABC Mall/Guadalupe Commercial Center, with its vendors, hawkers and stalls selling DVDs, food and what-not,  makes for a massive choke point, especially when combined with PUVs exiting Edsa from the northbound lane going to JP Rizal Avenue.

Meanwhile, vehicles lining up to  the exit can block five out of the six lanes, backing up traffic all the way to Kalayaan Avenue/Bonifacio Global City. All simply because various PUVs convert JP Rizal into a terminal and parking lot; traffic officer can’t exercise their police power and control these PUVs. Shame!

7.) Ayala Avenue. While traffic through Ayala Avenue has improved much, the last obstacle remaining to make this section free-flowing are vehicles entering Makati. Due to the sheer number of commercial, retail, business and civic establishments located particularly inside the Makati-Ayala CBD, it is difficult to get traffic free-flowing.

Thankfully the Ayala Tunnel helps speed up traffic. It’s only when idiot drivers swerve into the lanes going into the tunnel or swerve out of the tunnel lanes to make it the service road  entering Ayala Avenue  that there’s traffic.

8.) Magallanes Interchange. The Magallanes Interchange shouldn’t be a serious cause of traffic. Sure, Edsa-bound traffic has to squeeze into two lanes from six, but the traffic it creates is far worse than the cause of it. The dividing lane between cars going further into Edsa and  heading into South Luzon Expressway is just so unclear!

I honestly believe that if the powers-that-be put  a yellow line as far as 500 meters backwards, it will help enforce  lane discipline and alert motorists to stay on their proper lanes if they are going to Pasay-Manila or onto SLEx. Many motorists who drive up here are often confused on where to stay and go as Edsa curves to the left slightly before heading up the Magallanes Interchange. Hence, a lot of them make some last-minute swerving or dashing to make sure they get up on the right bridgeway. Which causes more havoc, and the local MMDA have a field day catching “swerving” motorists.

9.) Tramo flyover. After Magallanes Interchange, the two lanes open up briefly to six, only to be choked again by the service road of the Edsa-Tramo flyover.  It’s not all bad, but a handful of bus terminals compound and aggravate the problem when they’re moving in and out of their respective terminals

10.) Taft Avenue. And now we come to perhaps the second worst (after Cubao) choke point of Edsa: the dreaded Taft Avenue. A market on the northbound lane, a makeshift terminal for PUVs, the interchange stations of MRT3 and LRT1, not to mention it being the gateway to the University Belt, all contribute to ruin your day of driving. There is some hope here, however. President Aquino has approved construction of a flyover that should help ease traffic. But traffic will be hell on earth once it starts.

11.) Edsa-Macapagal Avenue U-turn slot. Again not so bad, but provincial buses making the U-turn here can be quite crazy. More traffic personnel are needed in this area to ensure buses and other PUVs, as well as private motorists, maintain lane discipline.

Eleven choke points. No single person managing and, crucially, coordinating the busiest thoroughfare in the country, possibly one of the busiest in the world. The MMDA needs to appoint a single person who can make decisions in an instant, coordinate the traffic flow and, basically, just focus on finding ways and means on improving traffic flow, without worrying about other areas. Not only can this person focus on traffic, but he/she can deal with improving the facilities and infrastructure.

Good areas to improve on are those underneath the flyovers. It is such a huge wasted space. Government can convert these areas into impound lots, temporary bus/PUV stops (not terminals, but simply  stops for passengers pickups and dropoffs), emergency parking bays,  and outposts/offices for the MMDA, the police and fire protection agencies.

Equally important is for government to put fences in these areas to prevent jaywalkers, bad elements, squatters and migrants from setting up inside these areas. That way, the vast majority of government agencies that need to respond to emergency situations are all situated along Edsa, which makes it easy and convenient for them to get straight into the hotspots, rather than being well inside an already very congested area.

The Sy-owned SM Group has done a most admirable job in doing their part to improve Edsa’s traffic flow. They built their own multivehicle bus stop on SM Megamall, diverting buses loading and unloading passengers from Edsa and thus preventing traffic from being obstructed by parked buses.  This area used to be one of the worst choke points on Edsa but now, thankfully, it  is free-flowing. The Aranetas should follow suit and build a terminal that diverts buses away from the Edsa-Cubao service road, and feed them into a proper PUV stop underneath the Araneta Center to free up traffic and, in the process, help get more people in and out of their shopping district.

By having government offices in the space underneath the flyovers, the cleanliness of these areas, peace and order, and improved visibility for agencies  are ensured.  Which in turn should help improve safety, security and overall impression of a hardworking government. I’m quite surprised nobody has ever thought of this yet.

Lastly, we need our traffic enforcers to be wired up and connected to each other properly. Without the ability to coordinate with each other, it will be impossible to coordinate traffic flow. We need our traffic enforcers communicating with a secret frequency, plus a CCTV network  hooked up to the main coordinating office with the Edsa traffic czar, as I’d like to think of him/her, monitoring everything. And he/she should be able to make snap decisions right on the spot, relay his/her decision to the traffic officers on Edsa, and coordinate implementing his decision. If Edsa’s traffic will improve, our economy will improve, basic consumer goods’ prices will drop, our stock market will hit the mythical 10,000 points this year, tourism will improve and so will productivity in the workplace. Why? Because life will be so much easier if there’s less traffic.

I’m up for it if there’s such a position available.

At least 350,000—estimated number of vehicles that pass through Edsa daily

16.9 kilometers—length of the MRT3, which runs from North Avenue in Quezon City to Taft Avenue in Pasay City.

1,600—maximum number of buses that can be handled by Edsa in a day, according to a study by the Japan International Cooperation Agency

12,000—estimated number of city and provincial buses that ply the Edsa route every day, according to Metropolitan Manila Development Authority Chair Francis Tolentino

29,641—total number of overspeeding contact apprehensions on Commonwealth Avenue as of June 26, 2013