business / Motoring
Motoring
ON THE ROAD 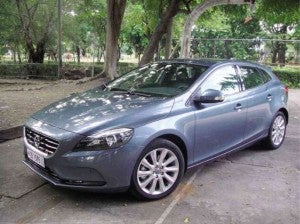 There was a time when Volvo was only always associated with luxurious safety and nothing more.  Lately, however, the Scandinavian car brand has broken tradition by producing stunningly stylish and agile as well as very safe cars.  The newest model to push the envelope is the 2013 V40, which was revealed at the Geneva Motor Show in March 2012.

Volvo developed the V40 to replace the  C30 three-door hatchback, the S40 four-door sedan and the V50 four-door wagon.  Aside from taking over the roles of those phased-out cars, the V40 is tasked with challenging the dominance of German brands in the increasingly competitive premium compact hatchback segment. How will the five-door V40 contend against the BMW 1 Series, Audi A3 Sportback and Mercedes-Benz A250 Sport?

When it comes to exterior styling, I’d say that the V40 is keenly competitive.  Longer, wider and crouched closer to the ground than its rivals, 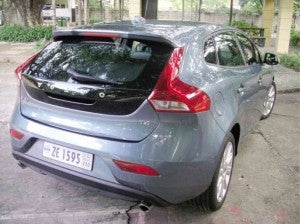 the V40 sports the clean, elegant lines of  Volvo’s signature design DNA plus a dynamically sculpted front end, contoured hood, wrap-around, projector-style headlamps, and LED daytime running lights sitting low in the corners.  A wide shoulder line, echoing the rising beltline, stretches all the way back to the half-glass tailgate with its high-positioned, curvy taillights following the sculptured corners.  The overall effect is a low, wide, eager-to-take-off athletic stance.

INTERIOR. The unostentatious approach to styling is carried over into the cabin featuring Volvo’s classic floating center stack and impeccable craftsmanship.  Although crammed with all kinds of cutting-edge technology, the V40 inside has a quality look and feel starting from the leather upholstery, solid materials, soft-touch dash and shimmer graphite trim to the illuminated leather-clad gear knob of the six-speed powershift. The centerpiece of the cockpit is a large Active TFT infotainment screen that can be programmed to one of three modes: Normal, Eco and Sport.  With each mode, the driver is shown a set of different graphics and info to aid the driving style selected.   When Sport is chosen, 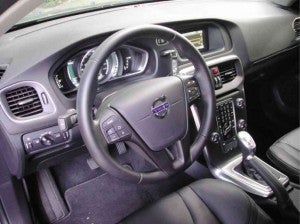 THE PREMIUM-QUALITY, high-tech cockpit is designed around the driver.

a red theme places more emphasis on the tachometer and replaces the analogue speedometer with a large centrally mounted tachometer with a digital speed readout. These driver aids combined with the primary ergonomics and comfort levels make the V40 a calming car to be in, although the big block of control buttons on the center stack needs some time to fathom.

Adjustable, supportive front seats and plenty of headroom, excellent all-around visibility, generous cupholders and cubbies to store small items make the V40 a pleasure to drive daily. But at the back, Volvo sacrificed some practicality in favor of style.  Headroom in the rear seats is limited due to the low roofline and, since the rear middle seat is tight, three adults cannot be accommodated comfortably there.  The V40 is a four-seater rather than a five-seater. Cargo capacity is limited to 335 liters with the 40/60 split rear seats up, 432 liters when the seats are folded.  However, the cargo area has bag hooks and a false floor that allows items to be stored on two different levels.

ENGINE. The V40 has a transversely mounted engine that provides more passenger space and better crash deformation than a longitudinal one.  Volvo built an entire set of  new four-cylinder and five-cylinder petrol engines and diesel powerplants for the V40. The one I test-drove has a 1.6-liter, four-cylinder, direct injection turbo petrol engine producing 180 bhp/5700  rpm and 240 Nm/1600-5000 rpm max torque.  A front-wheel-drive car, the V40 T4 has a 6-speed automatic transmission, MacPherson strut suspension up front, multilink independent arrangement at the rear plus coil springs, hydraulic shock absorbers and stabilizer bars fore and aft. Top speed is rated at 225 kph. 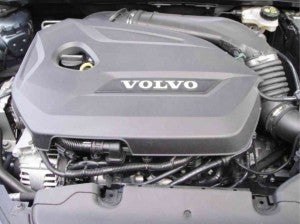 With underpinnings based on the Ford Focus (Ford Motor Co. used to own Volvo), the V40 feels refreshingly agile and composed on twisty roads with accurate and directly responsive steering.  For some enthusiasts, however, the steering may feel light and give inadequate feedback.  The T4 engine is punchy enough to deliver a frisky driving experience. The car’s Dynamic Chassis is tuned a bit firm, so the handling is sprightly. The compact, solidly built body contributes to smooth, enjoyable driving dynamics and the cabin is well-insulated from wind and road noise.  The V40 is nicely balanced, displaying adequate grip and minimal body roll on medium-fast bends and good body control over bumps and uneven road surfaces. With Volvo’s own spring and damper settings, the ride of the V40 is comfortable, quiet and refined. Thanks to all the safety features and driver aids, the driver’s level of fatigue is greatly reduced and one is allowed to concentrate on driving.  The V40’s only drawback is its large turning circle, requiring a three-point turn to make a U-turn on a tight city street.

FIVE STARS. The V40’s list of preventive and proactive safety features and security gear is too long to include here.  Suffice it to say that the 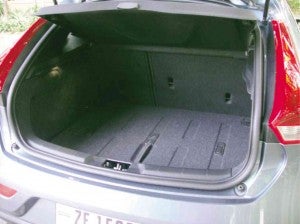 THE CARGO compartment has two floors with a concealed storage area in between.

V40 is rated one of the world’s safest cars, receiving five stars in the Euro NCAP collision test and an overall result that was the best ever recorded by the institute.  Volvo has always led the global auto industry in introducing advanced safety systems, the latest being the Pedestrian Airbag Technology in the V40.