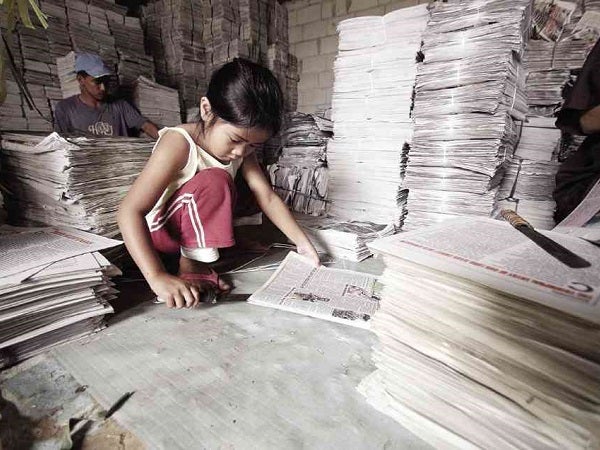 A YOUNG girl helps her parents cut up unsold newspapers in La Trinidad, Benguet. The bundles of newspapers are then packed into bundles to be sold as packaging materials for Benguet vegetables. The family can sell a bundle for P70. PDI-NL/Richard Balonglong

BAGUIO CITY—Many children dream of becoming scientists and professionals, but their future careers used to be defined by the work they did for the family to help bring food to the table.

Farmers used to teach their sons and daughters how to manage their rice fields. Shop owners required their children to mind the store.

But today’s child labor law and a more assertive campaign for child rights have made that form of job apprenticeship politically unacceptable, so the government and the private sector have been redefining ways of introducing the youth to the “world of work,” says Romelda Escano, Baguio labor and employment officer.

The First Quarter Pinoy Youth Barometer Project of the Asian Institute of Management (AIM), which was released here in March, shows that the youth start to consider their job prospects as early as high school, with at least 40 percent of high school and college students surveyed indicating that their future lies in work abroad. The survey had 200 college students and 100 high school students from 13 campuses around the country as respondents. 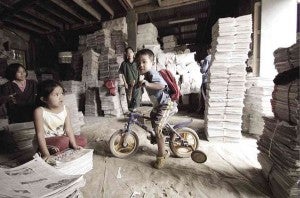 Escano says the youth must be exposed to all forms of work to send the message that every job is noble and acceptable even if it is offered in the country.

“My First Job Pilot” was the outcome of a 2009 Asian Development Bank study of the average time it took the youth to find a job.

Citing the study in his speech at the congress, Kelly Bird, ADB principal economist, says: “School-to-work transition is characterized by quite a lot of uncertainty for young Filipinos. Many of them are not sure about their career paths. They don’t have a lot of information about real opportunities. The transition for young females is a lot more difficult than males.”

This sense of alienation from the job market would be addressed by “My First Job,” which would immerse senior high school students in the work environment before they venture into the real world after graduation, Bird says.

The program will be tested in select towns with operating Peso in 2015.

Escano also says the project is studying the legal implications of an apprenticeship program for minors. The program provides on-the-job training for college students.

Bird says the transition from school to work is tougher for high school graduates.

“The transition was much easier for those who have had some form of college education. Those who graduated from college generally took less than two years to find a regular job,” he says.

Luistro states the evolution of basic education into K to 12 (the extended basic education format starting with kindergarten and 12 years of elementary and high school) would allow students time to mature before pursuing work or a college degree.

Read Next
Cleaning windows: Shell’s think tank mulls over world’s energy future
EDITORS' PICK
IATF to LGUs: Issue ordinances vs attacks on frontliners, COVID-19 patients
Diokno to Duterte: OK to make fun of buck tooth, but focus on people’s needs first
10 Filipinos positive for COVID-19 in UK, 7 in Ireland — envoy
Nograles: Cabinet members to donate 75% of monthly salary to aid COVID-19 fight
Robredo spox thanks Duterte for defending VP’s efforts vs COVID-19
Quick chat with Nicole Andersson: ‘You really don’t need much to be happy’
MOST READ
Coronavirus hotbed Rizal to shut borders on April 6
ADB warns PH against prolonged lockdown
Sotto on Isko Moreno’s call: We do our job without the media following our every move
‘Money Heist,’ ‘Tales from the Loop,’ ‘Killing Eve,’ ‘Never Have I Ever,’ ‘After Life’: Five not-to-be missed series this April
Don't miss out on the latest news and information.