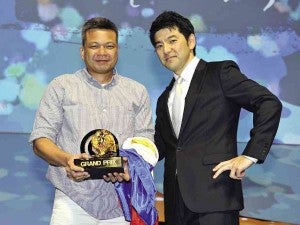 MANILA, Philippines—Advertising agency DM9 JaymeSyfu has won for the Philippines its first Grand Prix at the Cannes Lions International Festival of Creativity, the highest honor given by what is considered the Oscars of the advertising industry.

Smart TXTBKS involves the conversion of textbooks and workbooks into SIM (subscriber identity module) content that can be read by schoolchildren using affordable analog phones.

The SIM cards replace the voluminous school books the children have to carry in their bags daily, causing back problems and physical deformities in some of them.

DM9 JaymeSyfu proposed the idea of condensing book content to Smart in late 2012. They collaborated with book publishers to load materials into SIM cards provided by Smart. These were then distributed to several public schools in the Philippines.

In an interview with online publication Ad Age, Cannes Lions jury member Xavier Laoureux said what was “interesting about [Smart Txtbks] is that it’s the best way to show you can have a mobile idea without pushing the technology side of it. It was not using technology as the end.”

“This Grand Prix, it may not be the most sexy piece, or the shiniest piece of work, but it’s definitely one of the most beautiful pieces of work I’ve seen. It gives knowledge to every child in this country,” said AKQA vice president and chief creative officer Rei Inamoto, head of the mobile Lions jury. “And it’s one of the few ideas that has a chance of changing the world.”

Merlee Jayme, DM9 JaymeSyfu’s chair and chief creative officer, said: “We were studying the short-listed and were surprised that we won the Grand Prix for this very low-tech campaign. I’m still in a state of shock. This is the first-ever Grand Prix for the Philippines and it’s also our first-ever mobile win, which makes me very proud of the country.”

She added, “Our happiness comes from the fact that the country’s biggest telco got the biggest global award.”

“Smart TXTBKS is relevant in a country where the majority of the people still use feature phones, and where many families cannot afford e-book readers and tablets. We are happy that our partnership with DM9 has brought pride to the country, and has helped make learning easier for thousands of Filipino children,” Isberto said.

In 2011, DM9 JaymeSyfu’s “Limestone” billboard for Smart and the Department of Tourism, which showed how Philippine destinations can compete with the world’s best at a fraction of a cost, won a bronze in the outdoor category.

This year’s Cannes Lions received more than 35,000 entries from 92 countries. The winners were announced recently in Cannes.

There were other winners from the Philippines. JWT Manila won a gold in the outdoor category with its Energizer Philippines Schick Exacta 2 “Icons” poster campaign, which executive creative director Dave Ferrer said focused on a deliberately stark aesthetic with cutting-edge graphics to appeal to the target male market.

This is the second time JWT has won a gold for the Philippines. The first was in 2007, in the radio category.

Y&R Philippines won three Lions for Maynilad Water’s “Dengue Bottle” campaign: a silver in the media category, a bronze in promo and activation, and another bronze in the outdoor category.

Ace Saatchi & Saatchi won a silver and a bronze in the media category for its “Screen Age Love Story” campaign for PLDT MyDSL and a bronze for its Ariel “Olympic Shirt Flag.”

The Philippines so far has won eight Lions, with 30 more entries short-listed.

The Philippines’ official festival representative is the Philippine Daily Inquirer, represented by Felipe Olarte and Connie Kalagayan. With reports from Angel Guerrero and Kimi Lim, contributors