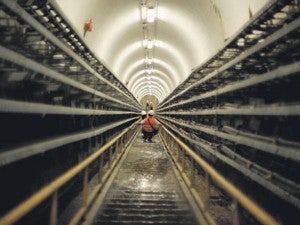 POWERHOUSE Workers maintain the Ambuklao Dam, one of the first hydroelectric plants to be constructed in the country, which has been revived after a 12-year hiatus by SN Aboitiz Power and is now earning carbon credits along with neighboring Binga Dam. EV ESPIRITU/INQUIRER NORTHERN LUZON

BAGUIO City—The revival of the 75-megawatt (MW) Ambuklao Dam, after a 12-year hiatus, and the upgrading of the 100-MW Binga Dam, both in Benguet, will earn about 180,000 carbon credits a year for renewable energy firm SN Aboitiz Power (SNAP).

Ambuklao Dam was built in 1950 and had generated electricity for years until it was damaged by the July 1990 earthquake and decommissioned after 1999.

But work to replace all of its equipment and to upgrade its capacity from 75 MW to 105 MW by October this year has convinced CMD auditors from the Philippines and from the UN to classify the dam as a new hydropower facility that meets the CDM criteria for sustainable development, Hosillos said.

Combined with the neighboring Binga hydroelectric plant, whose capacity would be increased to 124 MW, the facilities of SNAP-Benguet would generate 180,000 carbon credits yearly, which are equivalent to the carbon dioxide (CO2) produced by emissions from about 80,000 cars, Hosillos said.

In a statement, Emmanuel Rubio, SNAP-Benguet president and chief executive officer, said the CBD registration meant that “SNAP-Benguet … promotes hydroelectric power projects as a major source of renewable energy for the country.”

The CDM is a system that was spun off from the Kyoto Protocol, the climate change treaty ending in 2012, which requires all countries to reduce carbon emissions.

The CDM was designed to encourage countries to rely on projects that reduce greenhouse gas emissions by using efficient and renewable energy.

Firms that undertake these projects are entitled to carbon credits equivalent to the carbon emissions they displace, but only after a strict auditing process.

Carbon emission reduction credits can be converted into money when traded in carbon credit markets in Europe at prevailing market prices, Hosillos said.