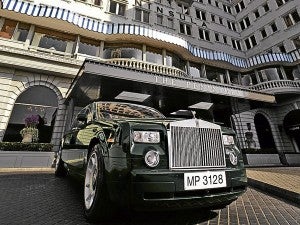 Rolls-Royce Motor Cars Ltd. has opened a dealership in Manila, signifying the “ultra-luxury” brand’s confidence in the thriving Philippine economy.

“We’re here for the potential. The economy is growing well, and everybody is referring to the Philippines as the growth engine of Asia,” Paul Harris, regional director for Rolls-Royce Asia Pacific, said in a briefing Wednesday.

According to Harris, the parent firm has been keeping a close watch on the Philippine market, and has now decided to include the country in its expansion plan in the Asia Pacific region, on the back of a thriving economy and Filipinos’ increased interest in the brand.

Rolls-Royce has appointed local firm British Bespoke Automobiles as its official importer-dealer for Manila. It will be responsible for Rolls-Royce Motor Cars Manila. British Bespoke will be bringing in Rolls-Royce’s Phantom, Ghost and Wraith motor cars to the country.

Starting price for the Ghost alone was pegged at P25.9 million, inclusive of taxes.

This early, the company has already received as many as 30 inquiries on the possible purchase of Rolls-Royce cars, piquing the interest even of businessmen like Manuel V. Pangilinan, according to Ten.