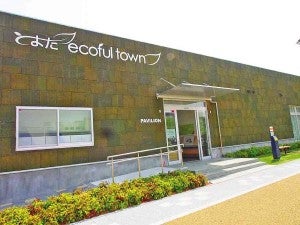 TO BETTER understand the energy system of Toyota City, you have to go to Toyota Ecoful town. Photo by Tessa R. Salazar

Auto giant Toyota Motor Corp. has gone beyond merely creating hybrid cars. It has looked at the much bigger picture, and has funded reforestation projects as well as helped in creating a low-carbon emitting society. It knows, however, that implementing its vision too soon on a global scale would be akin to Don Quixote calling for a duel with the windmills. So, it has set its sights on a more manageable scale—in its sprawling Toyota City in Nagoya.

Forty journalists flew in at Nagoya and traveled for 40 minutes to reach Toyota City, a 91,847-hectare (918.47-square-kilometer) industrial society which, ironic to its classification, is a “low-carbon producing society” on 62,754 ha of forest. Here, an industrialized urban area and Mother Nature coexist. As of March 1, Toyota City has a population of 44,135 (In comparison, Metro Manila,  638.6 sq km large, has a population of nearly 12 million.)

So, how does an environmental model city that targets a 50-percent reduction in its carbon dioxide emissions by 2050 look like?

Toyota City features prototype smart homes, electric vehicles and an ultraefficient traffic system. The city’s “life pulse” was demonstrated at the Toyota Ecoful Town, where a pavilion illustrated energy management systems, new technologies on traffic management and safety, an on-demand bus system and pedestrian detection systems, among other things. Toyota’s perspective on the smart community focuses on local management from the viewpoint of motor vehicles, houses, and information and energy management. 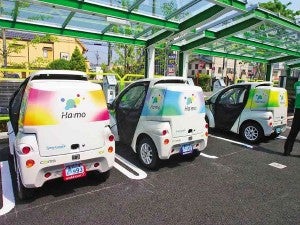 Journalists saw city-fit compact electric cars in action. These ultracompact electric vehicles were used in a self-service vehicle-sharing system complementing public transportation. The energy consumption of the smart homes were closely managed and monitored by homeowners using modern devices. The energy used for the homes was from the sun, and even from homeowners’ cars that had excess energy (the vehicle, in effect, serving as a mobile generator). There are also systems that optimize the use of energy in public spaces.

The energy management system in Toyota City virtually began in August 2010, when the Toyota City Low-Carbon Society Verification Promotion Council was established. In October 2010, the system development for energy began in earnest. The first model house was completed in June 2011. The first group of residents started living in smart houses later that year. In March 2011, the development of a vehicle with V2H (vehicle-to-home) functionality was completed. The Toyota Ecoful Town was opened in May 2012. And in October 2012, the Urban Transport System called “Ha:mo” started operations.

Members of the international motoring press were also given the chance to go on a circuit run and public road drive on Toyota City using the Prius plug-in hybrid, Estima hybrid, Lexus RX 450h, Lexus CT200h, Alphard hybrid and the Prius CX. The most challenging part was competing with each other in a fuel miser run using the Prius in the 1.561-km Spa Nishiura Motor Park circuit. 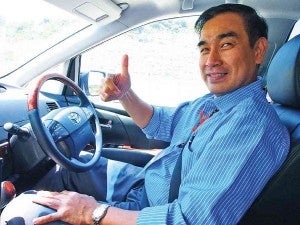 Before the run, we were given tips on how to optimize the energy efficiency of each Prius variant. The instruction was to go full-speed on straight runs so as not to consume much time, and then slow down to average speeds (to optimize the use of electric vehicle mode) on corners and turns.

Having driven a Prius in various occasions for the past four years around the Philippines, my running average was somewhere between 20 and 24 kilometers per liter. This writer thought that the circuit run would be a walk in the park. Apparently, some drivers were even more lightfooted. The tandem of Toyota engineers, as expected, topped the event at 32 kpl, while the Philippine team of Top Gear’s Dinzo Tabamo and Toyota Motor Philippines’ Tonyo Silva squeezed out 29.75 km, and they were declared overall winners. My team (I was the designated driver, while Bernadette Magkilat of Manila Bulletin was navigator) got 23.35 km.

Apparently, the Prius could run even more efficiently. The Japanese Ministry of Land, Infrastructure, Transport and Tourism lists the Prius’ optimum fuel economy reading at 38 kpl, after up to 15 test cycles.

Toyota developed and sold the world’s first mass-produced hybrid in response to environmental issues. The vehicle’s seamless interplay between the electric and gasoline engine is managed by the breakthrough Hybrid Synergy Drive and its intelligent energy-management system. Its seat cushion, scuff plates and other interior components are made of ecological plastic.

According to Toyota, popularizing hybrid vehicles is the key to reducing fossil fuel reliance. Its engineers stressed that the hybrid technology is the core technology that can be applied to a variety of next-generation environmental vehicles.

The utopia at Toyota City merely showed the Prius in its natural, perfect habitat.