Spreading the Bentley wings into the new world 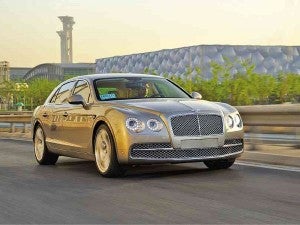 THE W12 Mulliner offers more standard goodies and toys for the well-heeled and stately enthusiast.

With a powerful emerging market in Asia, it didn’t come as a surprise that Bentley Motors held its global media launch and test drive of the all-new Flying Spur ultra premium luxury executive sports sedan at  the fabled capital of China, Beijing recently.

Known as the Northern Capital, Beijing is China’s seat of political power, the site of the 2008 Summer Olympics, and representative of both China and Bentley’s proud and storied respective pasts as well as their promising futures.

The all-new Flying Spur is a technological tour de force yet retains enough of its old-world charm to entice  old and new customers alike. The Flying Spur finally becomes its own stand-alone model rather than the 4-door variant of the previous Continental GT 2-door coupe with Bentley dropping the Continental name altogether, and thus naming it simply as the Flying Spur.

Bentley today remains the leading manufacturer of ultra premium luxury cars, posting a 22-percent growth in 2012 as opposed to a shrinking global market. With nearly 22,000 units of the older Flying Spur sold to customers, many of which are found in China, and many more in other emerging markets such as Russia and the rest of Asia, Bentley had a tough act to follow but has come out of its Crewe headquarters with a real ringer. 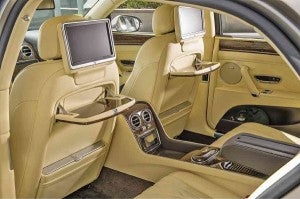 BEING a royal family’s choice vehicle, the Flying Spur’s interior is as much a sitting-room fit for the Queen, offering leather seats, tea trays, a detachable touch-screen remote control and a two-champagne cooler.

The all-new Flying Spur is Bentley’s most powerful  4-door saloon ever, boasting of a  616.44-horsepower twin-turbocharged W12 engine that transfers its power (and 800 Newton-meters of torque) through a ZF8-speed automatic transmission and a Haldex all-wheel drive system, split 40:60 front to back to deliver a stable, surefooted and yet still engaging driving experience. Despite being the most powerful Bentley sedan ever, fuel consumption is down 13.5 percent with a 12-percent increase in power.

Bentley projects 14 liters per 100 kilometers, or roughly 7.1 kilometers per liter. Open the taps completely and the Flying Spur accelerates from naught to 100 clicks in a supercar slaying 4.6 seconds and reaches a terminal velocity of 322 kilometers per hour, faster than a good number of supercars. However, expect fuel to vaporize as quickly as investing your fortune in a Ponzi scheme by doing so.

The body is 50 kilograms lighter, particularly in the front end, to help improve handling and responsiveness thanks to the extensive use of aluminum; and the rear trunk lid utilizes advanced polymer-plastic composites to reduce weight and allow for the forming of the complex double-horseshoe-design theme, almost impossible and prohibitively expensive with the use of traditional metal cutting and stamping techniques. 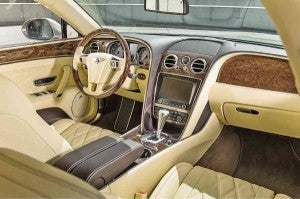 Full-length acoustic under-sheets help reduce NVH and crucially lower drag, from the previous model’s 0.33 cd to the new one’s 0.29 cd, one of the lowest ever cds in a vehicle that is essentially bigger than most peasants’ third-world shanties.

There are two basic variants available, the W12 and the W12 Mulliner, the latter offering more standard goodies and toys for the well-heeled and stately enthusiast. More than 600 combinations of interior and exterior colors are available, plus a multitude of special finishes such as the famous machine-turned/engine-spun aluminum dash and interior panels, a variety of wood trims, and even contrasting leather interiors with an equally contrasting stitching available. Specially developed 275/45R19 comfort wheels were developed and come as standard, with 20-inch and 21-inch wheels available as an option. Mulliner Edition Flying Spurs come with bespoke 21-inch multipiece wheels and tires,  and all-chrome front upper and lower radiator grills to differentiate it from the regular W12. 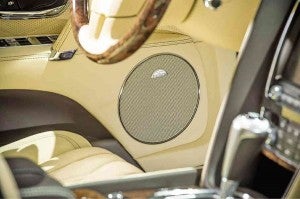 a detachable touch-screen remote control and a two-champagne cooler.

A Flying Spur’s interior is as much a sitting-room fit for the Queen (after all,  it is the royal family’s choice vehicle in England) as it is a luxurious mobile office, offering heavily padded, rich quilted leather seats, tea trays for the rear seat occupants, reclining rear seats, 4-zone climate control, a detachable touch-screen remote control that allows rear seat occupants to play audio and video independently left and right thanks to dual 10-inch LCD full-HD screens mounted atop the tea trays. Bespoke Bentley-branded headphones are available as an option, as well as downloading an application that allows your own mobile phone to integrate and function as a similar touch-screen remote, available soon for Apple and Android devices. Mobile high-speed Internet and Wi-Fi are also available, allowing as much as eight devices to connect seamlessly onto the in-car network and connect to the Internet seamlessly. 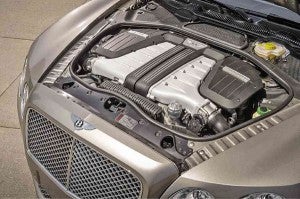 More electronic equipment include multiple USB charging ports, a dedicated 64-gigabyte hard drive to store audio and video files as well as Satnav/GPS maps. The driver and front-seat occupants receive their own 6.5-inch LCD multifunction screen that displays audio, HVAC and Satnav/GPS information along with 14-way adjustable power seats with memory functions. The sporty 3-spoke steering wheel adjusts for both reach and rake, and has paddle shifters mounted behind for manual override control of the eight  forward gears.

A two-bottle champagne cooler is also available, with 4-seat variants (standard on the Mulliner) as well as 5-seat versions available. In total, there are 600 new and improved interior parts, the only major components carried over from the old Flying Spur being the window shades and window visors. 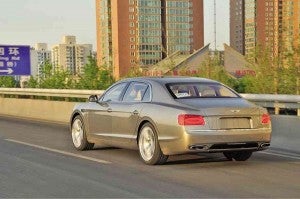 The Bentley is both  a joy to drive or simply sit in, as Bentley customers have a higher propensity to drive their own cars on the weekend or after office hours as much as to sit in the back in solitude. The chassis utilizes high-strength steel in critical accident-prone hit areas for maximum strength, delivering a massive 36,500 Nm-per-degree bending/twisting resistance, a 4-percent improvement over the older model.

There’s also intimate attention to detail rarely seen in other ultraluxury vehicles, from the cross-drilled brake and accelerator pedal, the way the wood veneers have a solitary matching grain, the fine perforation on the leather seats, the winged B emblems featuring on the side engine air vents (a new Bentley trait to be seen in future cars) and the jewel-like LED/HID headlights which are bigger, more prominent on the new Flying Spur.

Bentley sees the Flying Spur to take it past 10,000 units annually in the near future, attract a new, younger and more vibrant customer base, and successfully establish its foothold in the new world market.