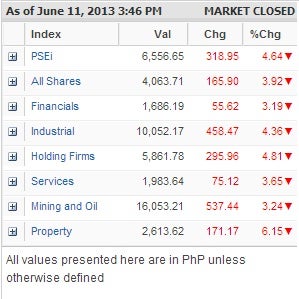 Local stocks on Tuesday saw their worst bloodbath in 12 years as investors were shifting some funds back to the US markets.

The main-share Philippine Stock Exchange index slumped 4.64 percent, or 318.95 points, to close at 6,556.65, tracking weak regional markets. All counters faltered but the most battered was the property counter, which fell by 6.15 percent.

There were more than six decliners for every single gainer. Value turnover amounted to P12.54 billion.

“I think this is due to the exit of foreign investors. They are converting pesos into dollars and preparing to enter the equity market of the US,” said Jose Mari Lacson, head of research at Campos Lanuza & Co.

Lacson said global funds were locking up profits from the region to take advantage of opportunities in the United States. “You can’t stop it at this point,” he said.

Joseph Roxas, president of Eagle Equities Inc., said the decline had nothing to do with the string of unfavorable local economic data that came out Tuesday. He said it was really due to the slump in the peso against the dollar alongside the weakening of other currencies in the region.

The peso closed at 43.20 against the greenback on Tuesday, depreciating from 42.78 on Monday. It was also reported on Tuesday that the unemployment rate in April had risen to 7.5 percent from 6.9 percent a year ago while April exports fell 12.8 percent year on year.

Tuesday’s stock trading reflected the market’s inability to sustain the rally, said Banco de Oro Unibank chief strategist Jonathan Ravelas. “Support lies at 6,397.56. If this gives, next stop is at 6,000,” he said.