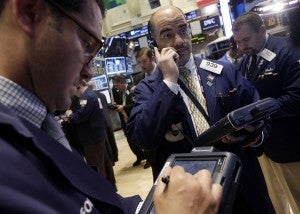 Luigi Muccitelli, center, work with fellow traders on the floor of the New York Stock Exchange, Monday, June 10, 2013. The stock market is getting off to a mixed start as traders show only mild enthusiasm for an improving outlook for the U.S. government’s credit rating. (AP Photo/Richard Drew)

NEW YORK—US stocks Monday finished the day mixed after Standard & Poor’s raised its outlook for the US debt rating and lackluster economic data out of China.

Before trade opened S&P upgraded its debt rating outlook for the United States, saying there is now less than a one-in-three chance for a downgrade in the near term.

S&P cited a somewhat improved US political climate following the yearend 2012 “fiscal-cliff” deal and a US economic environment that should lead the country to “match or exceed its peers in the coming years.”

Over the weekend, China reported industrial output in May rose by 9.2 percent year on year, slightly weaker than the 9.3 percent increase in April.

China’s fixed asset investment—a key measure of government spending in the world’s second-largest economy—increased 20.4 percent from January through May compared with last year, slowing from the 20.6 percent gain in the first four months of the year.

Apple dipped 0.7 percent after unveiling its iTunes Radio Service as a streaming music competitor to Pandora and Spotify. The launch came at Apple’s annual developer conference in San Francisco.

Yoga attire maker Lululemon Athletica gained 1 percent during the session, but fell 9.1 percent in after-hours trading after the company announced chief executive Christine Day would step down once a new leader is identified.

Google rose 1.2 percent following reports the technology giant is close to a deal to acquire Israeli mapping application Waze. Media reports put the size of the deal at $1-$1.3 billion.

Bond prices sank. The yield on the 10-year US Treasury rose to 2.22 percent from 2.16 percent late Friday, while the 30-year increased to 3.37 percent from 3.32 percent. Bond prices move inversely to yields.

Robredo in Baguio: Trust is not entitlement, we have to earn it