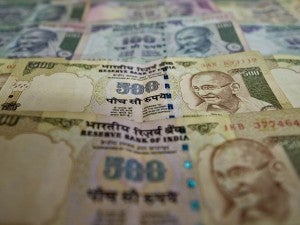 In this photograph taken on December 7, 2011, different denominations of Indian Rupee currency notes lie on a surface in New Delhi. India’s rupee hit a record low of 57.37 against the dollar on June 10, 2013, on growing demand for dollars among oil importers, while the greenback was also boosted by upbeat US jobs data. AFP /Manan VATSYAYANA/FILES

MUMBAI— India’s rupee hit a record low of 57.54 against the dollar on Monday, on growing demand for dollars among oil importers, while the greenback was also boosted by upbeat US jobs data.

The partially convertible rupee hit its previous low of 57.32 against the dollar on June 28 last year. On Monday it fell to a new record low before trading up slightly at 57.49 later in the morning.

The fall is the latest blow to the damaged growth story of India, Asia’s third-largest economy, which has also been beset by sharply slower growth, worsening public finances and political turmoil.

The rupee depreciated seven percent against the dollar in May, similar to other Asian currencies.

Analysts and traders will now watch for any possible intervention from the central Reserve Bank of India to stem any further weakening of the currency.

The widening of India’s current account deficit— the broadest trade measure— to just under five percent of gross domestic product in the last financial year from 4.2 percent the previous year has also weighed on the rupee.

The RBI has a policy of not commenting on movements in the forex market and has a stated policy of intervening only to curb volatility.