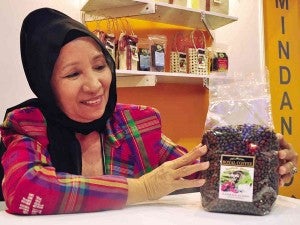 Like a civet cat that eats only the best coffee berries, Princess Kumala Elardo chooses the coffee that she drinks.

“I noticed a charming quality of the wild civets of Sulu: They pick and eat only the best and ripest coffee berries. And because of this, we are able to produce Mindanao’s finest civet coffee, a blend fit for royalties,” Princess Lala, as she is fondly called, shares during the recently held International Food Exhibit (Ifex), the country’s largest gathering of food producers, processors, exporters, and buyers.

Princess Lala is a descendant of Sulu’s two royal houses, making her a full-blooded Putlih or princess of Sulu in that historical group of islands off-coast of Mindanao.

“What makes our product more exciting other than its exceptional taste is the story itself. You see, we are not only selling the world’s best-tasting coffee, but we are also selling coffee as peace products,” she says.

Cleverly named the Sulu Royal Coffee, the product represents her royal heritage and speaks of the coffee’s exotic taste and origins.

Produced by the People’s Alliance for Progress Multi-purpose Cooperative (PAPMC), an agrarian reform community based in the Panamao town in Sulu, the Sulu Royal Coffee has become the major source of income of the organization’s 354 members, 60 percent of whom are women.

“When our members realized that there is income in producing civet coffee, many of them sold their guns and used the money for additional capital for the business enterprise. Today, you will see men carrying sacks of civet droppings instead of long firearms,” narrates Princess Lala.

“We are planning to increase our production by expanding our farm in the neighboring town of Patikul,” she says.

The coffee’s distinct aroma and creamy taste have already caught the attention of Canadian and Korean buyers and is being sold by PAPMC internationally through the National Coffee Board Inc.

The cooperative is also supplying civet coffee to specialty stores in Manila and key cities in the country.

“We have a 70-30 sharing scheme, in which 30 percent of net income will go to the cooperative for research and marketing, while the remaining 70 percent will go directly to the farmers,” explains Princess Lala, adding that farmers who sell their coffee to the cooperative also get dividend and patronage refunds.

She says that since the inception of the cooperative, members of the organization are slowly rebuilding their lives by constructing concrete houses, and by sending their children to school after decades of armed conflict in the area.

“There used to be a lot of idle out-of-school children and youth in my barangay. But now, most of them are in school, while a number of individuals were able to finish college. Years back, I was the only one in my village who completed a bachelor’s degree,” Princess Lala says.

Considered as the most expensive coffee, civet coffee is made from coffee beans that are consumed and discharged by Asian palm civet, a cat-like creature indigenous to Southeast Asia and known to have a liking for ripe coffee berries.

The enzymes in the civet’s stomach act as catalyst in producing beans that create a coffee with distinct caramel-like taste, which can fetch steep prices in select coffee shops worldwide.

At an upscale coffee shop in the US, a cup of civet coffee can cost to as much as $105 or P4,200. Its rarity combined with its exotic taste and popularity contributed to the coffee’s expensive price.

The popular coffee, however, was marred with controversy when animal welfare groups discovered that some civet coffee producers in Southeast Asia are keeping civets in tiny cages and forced them a debilitating diet of mainly coffee berries. Civets are omnivorous mammals that also feed on pulpy fruits, insects, and small birds.

But unlike the civet coffee produced by other neighboring Asian countries, Princess Lala assures that no harm has been done to the civets of their farms, which live in the wild.

“We can assure our buyers that the Sulu civets are not confined in tiny cages or are force-fed with coffee berries. What we gather are droppings of ‘happy civets’ that roam freely in the wild,” she stresses.

The Mindanao Development Authority and the Department of Trade and Industry and the Department of Agriculture invited PAPMC to participate in the Ifex in Manila that gathered over 700 food exporters and global buyers from key regions and cities in Asia and US. More than 70 food processors, producers, and exporters from Mindanao participated in the weeklong food exposition, which featured a Mindanao pavilion that showcased the region’s best food products.