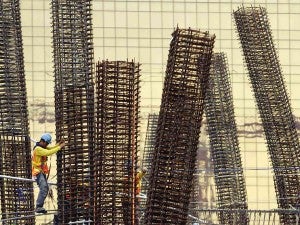 A construction worker wires together steel frames for the foundation of a building still under construction in Parañaque City. Construction and manufacturing were among the biggest drivers of the 7.8-percent growth in the country’s gross domestic product. RAFFY LERMA

The Philippines became the fastest-growing economy among Asian countries during the first quarter of the year, with a better-than-expected growth rate of 7.8 percent, boosting the country’s efforts to attract more foreign investments.

Driven by strong manufacturing and construction sectors, the first-quarter growth was the highest since President Aquino took office in 2010, Jose Ramon G. Albert, secretary general of the National Statistical Coordination Board, said Thursday.

Aquino’s allies won majorities in both houses of Congress in midterm elections early this month, making it possible for him to proceed with his legislative agenda in his remaining three years in power.

“Business confidence and consumer optimism fueled this growth, [erasing] doubts cast on the 2012 figures that [they were] due to base effects only,” said Socioeconomic Planning Secretary Arsenio M. Balisacan.

Malacañang raved about the unexpected growth, but said it needed to be sustained to enable the masses to benefit from economic improvements.

“There is no one-to-one correspondence. It takes some time, which is why the goal of the administration is to sustain the growth,” she said.

“We are getting there. While it’s a work in progress, we have to make direct interventions,” she added, referring to conditional cash handouts to 3.9 million of the country’s poorest households.

Balisacan said the first-quarter growth was the second-fastest growth rate for the Philippines since the 8.9-percent growth in the first quarter of 2010.

The growth of the gross domestic product (GDP), the value of all goods and services produced by the economy in a given period, surprised even the government’s own economic managers.

Balisacan, also director of the National Economic and Development Authority (Neda), said the growth from 6.5 percent in the first quarter of 2012 was widely unexpected, beating market forecasts that settled at 6 percent.

He said the 7.8-percent growth rate beat even his own forecast.

“But please note that I was the most optimistic of all,” he said, spurring a flurry of tweets and retweets.

“I said, ‘Wow,’ when I saw the number. That was the reaction, I think, of everybody who saw the number,” Trade Secretary Gregory Domingo said in a text message.

“It was significantly higher than expected given the weakness in exports, but it just goes to show the strength in other areas. Manufacturing showed its leadership, with almost 10 percent growth, which is a very big accomplishment,” Domingo said.

Economist Cid L. Terosa of the University of Asia and the Pacific said by text message that his own calculation of the GDP growth was about 6.6 percent to 7 percent.

“Election spending and consumption contributed a lot to the spectacular first-quarter growth. To sustain it, consumption spending must be supported by strong investment spending, trade performance and sustained remittance inflows,” Terosa said.

Sergio R. Ortiz-Luis Jr., president of the Philippine Exporters Confederation Inc., said the growth was surprising given the weak exports market, but he added that election spending might have had some impact, even small.

Encouraging local businesses and local industries like mining would help the country sustain a 7-percent to 8-percent growth for the next 10 or so years, and this could curb poverty, Ortiz-Luis said.

The Manila Business Club attributed the strong first-quarter performance of the economy to the “sound macroeconomic foundations of the country, the capable leadership of our economic managers, and the steadily growing confidence of investors in the economy.”

With the robust first-quarter growth, the club said the country was on track to achieve its 6 percent to 7 percent full-year economic growth target for 2013.

Melito S. Salazar, president of the Management Association of the Philippines, credited recent reforms for the high growth rate.

“With the recent election results, we are confident that more reforms will be introduced and previous reforms will be sustained, so higher growth is expected,” Salazar said.

The Neda said in a statement that the development on the production side was broad-based, with all sectors contributing positively to growth during the first quarter.

“[The] impressive performance of these sectors prove that the country is already reaping the benefits of strengthening priority sectors that are potential growth drivers and employment generators,” Balisacan said.

He noted that under agriculture, which grew by 3.3 percent, fisheries showed a huge increase of 5.5 percent after previous quarters of contraction.

“This shows that sustainable management in fisheries is also an effective growth strategy,” he said.

He described as “stirring” the 32.5-percent growth of construction, indicating, he said, “good positioning toward an industry-led economy.”

“Initially, this was led by infrastructure spending of the government. By the second half of 2012, private construction started to rebound,” he said.

Exports contracted in the first quarter, primarily because of a decrease in foreign demand for electronic components.

But Finance Secretary Cesar V. Purisima spoke Thursday of “signs of global recovery” and expectations of an increase in exports.

“With the coming finalization of rules governing the mining sector, we expect to unlock another highly potent growth driver,” Purisima said.

He said the government’s strong cash position, arising from a robust growth in revenue collection, resulted in a 45.6-percent expansion in public construction and 13.2 percent in overall state spending.

“Coupled with the country’s first investment-grade rating by a major ratings agency, we can say with much pride that good governance is good economics,” Purisima said.

Budget Secretary Florencio B. Abad issued a statement saying the growth in manufacturing was particularly interesting because it was driven mainly by increased production of foodstuff.

“This not just translates to an increasing demand for local food products, but also indicates a growing need for unskilled laborers to support the industry’s demands, which may help create thousands of jobs for Filipinos,” Abad said.

Despite the impressive growth figures, the Philippines faces many challenges. Among them, the global slowdown, excessive capital inflows and natural disasters, an annual occurrence in the country whose rickety infrastructure and rice fields suffer damage from typhoons and floods.

“Disasters can negate the gains and even push back development. Moreover, the global economy remains fragile, negatively affecting our trade performance,” Balisacan said.

“Due to the attractive investment opportunities, we are also at risk of receiving too much capital inflows as advanced economies implement quantitative easing. The challenge is to channel these inflows into productive investments,” he said.—With reports from TJ A. Burgonio, Ronnel Domingo and AP