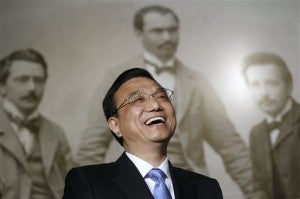 In a speech in Swizerland, Li said the action will hurt European consumers and might encourage trade protectionism, the official Xinhua News Agency reported.

The 27-nation EU imposed anti-dumping duties on Chinese-made solar panels this month to offset what it said were improper subsidies. Also this month, the EU said it will investigate whether Chinese telecom equipment makers also receive improper support.

“The cases over these two types of products will hurt Chinese industries, business and jobs and also damage the vital interests of European users and consumers,” Li was quoted as saying in Zurich. “We express firm opposition.”

Li gave no indication how Beijing might respond but his comments could fuel fears the government might retaliate against European telecom equipment suppliers that are looking for sales in China.

Chinese officials plan to bring up the disputes over solar and telecoms equipment when they meet European officials Monday in Brussels for regularly scheduled talks on trade and investment, the Commerce Ministry announced Sunday.

China faces complaints in a range of industries from clean energy to tire manufacturing that Chinese companies benefit from improper government support, including low-cost access to loans, energy and land.

In the telecoms case, the EU said last week that if negotiations with Beijing fail, it will open an investigation into whether Chinese manufacturers receive improper support. A decision that they do could lead to higher import tariffs.