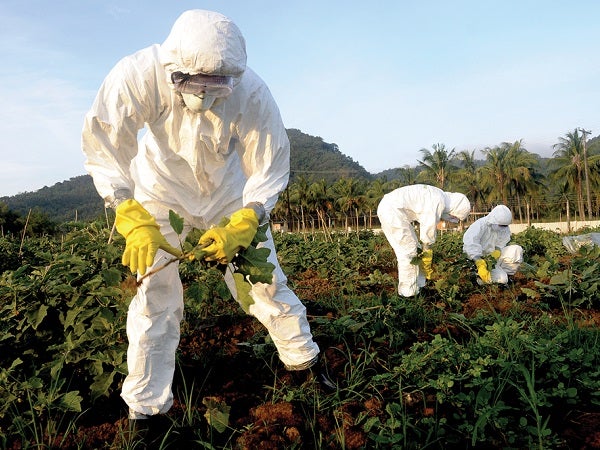 MANILA, Philippines—Greenpeace Southeast Asia (Philippines) on Friday welcomed a ruling issued by the Court of Appeals (CA) to permanently put a stop to the field trials of genetically modified eggplant, which the environmentalist group believes is harmful to humans and the environment.

In a 26-page decision dated May 17 but released only Friday, the appellate court granted the petition sought by Greenpeace and other groups against the planting of Bt (Bacillus thuringiensis) talong (eggplant). Bt is a soil bacterium inserted into crops to develop insecticidal properties.

The trials were being jointly conducted by the University of the Philippines in Los Baños and various government and private agencies.

At the time of the filing of the suit, field testing had already been done in Pangasinan, Laguna and Camarines Sur provinces while others were still being conducted in Kabacan, North Cotabato province.

The respondents in the case were: the environment department’s Environmental Management Bureau; the agriculture department’s Bureau of Plant Industry and Fertilizer and Pesticide Authority; the University of the Philippines Los Baños Foundation Inc.; the UP Mindanao Foundation Inc.; and the International Service for the Acquisition of Agri-biotech Applications-Southeast Asia Center.

The court directed the respondents to “protect, preserve, rehabilitate and restore the environment in accordance with the foregoing judgment of the court.”

“It is clear that there is no full scientific certainty yet as to the effects of the Bt talong field trials on the environment and the health of the people,” said the appellate court’s Special 13th Division, speaking through Associate Justice Isaias P. Dicdican.

“Consequently, the field trials of Bt talong could not be declared by this Court as safe for human health and our ecology, with full scientific certainty, being an alteration of an otherwise natural state of affairs in our ecology.”

The court said even the local and foreign experts presented by proponents of the purportedly pest-resistant eggplants all agreed that aside from the fact that there are no laws regulating the field testing of genetically modified plants, their safety cannot fully be guaranteed.

“We commend the Court of Appeals for living up to its constitutionally mandated role as protector of constitutional rights,” said Daniel Ocampo, Greenpeace Southeast Asia’s sustainable agriculture campaigner.

“This landmark decision reflects that there are indeed flaws and lapses in the current regulatory process for genetically modified organisms (GMOs) such as Bt eggplant which exposes our environment and health to unknown long-term consequences and does not establish their safety in any way,” he said in a statement.

In its petition, Greenpeace claimed the Bt eggplants could endanger consumers as it was found to cause damages to internal organs. With its built-in insect-resistance gene, Bt eggplants can also create aggressive weeds that may wreak havoc to local agriculture and natural habitats.

The groups brought the suit on April 26 last year before the Supreme Court under  its new environmental protection procedures. The writ of kalikasan is a legal remedy under the new rules of procedure for environmental cases.

The Supreme Court issued the writ of kalikasan on May 2, 2012, directing the respondents to answer the petition.

The petitioners were represented in the suit by lawyers from the Roque and Butuyan Law Offices.

Greenpeace lauded the CA for ruling in favor of the petitioners based on compelling grounds, including the “irreversibility” of releasing GMOs into the environment even during field trials, and the fact that current field-testing protocols “look at efficacy and agricultural performance and not safety for human consumption or environment.”

“The respondents could not prove wrong the fact that Bt talong field testing is an environmental case where scientific evidence as to the health, environmental and socioeconomic safety is insufficient, inconclusive or uncertain and preliminary evaluation indicates that there are reasonable grounds for concern, that there are potentially dangerous effects on the environment and human health,” she said.

Ocampo said the CA decision would have a resounding impact on the future of agriculture in the Philippines and on how food production was being done in our country.

He added that the court’s decision was an affirmation of what Greenpeace has been saying for years about the flaws in GMO regulations in the country.

“These flaws in the government regulations have led to the sad state we are in—62 GMOS are imported and fed to Filipinos without their knowledge and consent. While the environment and our farmers are exposed to eight kinds of GMOs that are allowed for propagation without knowing their long-term impacts,” Ocampo said.

The petition argued that the field trials violated the constitutional right of the people to a balanced and healthful ecology because of the danger of contamination the technology posed to indigenous genetic resources of the country.

The petitioners cited results of the 90-day laboratory tests conducted by proponents of genetically modified organisms on mice fed with the new Bt eggplant, which showed signs of toxicity in the liver and kidneys of the test subjects.

In 2002, the Bureau of Plant Industry began approving GMOs for importation as food, feed and processing as well as for propagation. The proposals for GMO approvals used studies conducted by the GMO proponents themselves, instead of independent risk assessments.

Greenpeace claimed GMOs have never been proven safe, which is why they are highly regulated and even banned in many countries and regions. It urged government regulators to instead focus on sustainable agriculture instead of loosely allowing the conduct of field trials and commercialization of such crops for eventual human consumption.

It would be recalled that in December 2010, the Davao City government uprooted Bt eggplant from the field where they were being tested by the UP Mindanao Foundation.

Experts presented by the respondents, including some of the country’s top scientists at the University of the Philippines in Los Baños, argued that the Bt talong technology is safe and does not cause harm to the environment.

However, on questioning by the court, they admitted that the overall safety of the Bt talong remains to be unknown. The court also found that other than administrative issuances, there is no law that regulates field testing of GMOs in the country. With a report by Jerome Aning