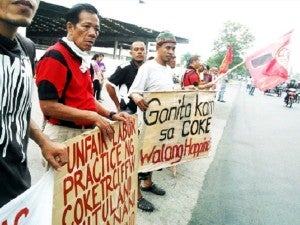 SAN PEDRO, Laguna, Philippines — The three-day strike by some workers at the bottling plant of Coca-Cola Bottlers Philippines Inc. Sta. Rosa, Laguna has ended in an amicable settlement between the workers’ union and the company.

The workers lifted the strike at around 7 p.m. Wednesday and removed the barricades that had blocked four gates of the bottling plant in Barangay (village) Pulong Sta. Cruz since Monday morning.

“After a meeting at the NCMB (National Conciliation and Mediation Board in Calamba City, Laguna), the management with their lawyers met with the officers of the union and together signed a three-page agreement,” Rosales said in a phone interview Thursday.

The agreement provided for the “absorption” of the 430 UMDFP-CCBPI-IND members as regular employees of CCBPI within three months from the date of the signing of the accord.

It said the workers would be entitled to employees’ benefits under the collective bargaining agreement and to tax-free financial assistance that consists of P15,000 cash and P9,000 rice allowance to be given on or before June 15.

Both parties also agreed “not to have retaliatory actions against each other,” said the agreement, a copy of which was posted on the Pamantik-KMU website.

“The workers are now all back to work,” Rosales said.

The Sta. Rosa bottling plant makes up the bulk of CCBPI’s operations in the Philippines. The company, just in March, had made known its plans to shut down its concentrate plant in Canlubang, also in Laguna, but said this would not affect the Sta. Rosa operations. CCBPI has 23 production plants, serving around 800,000 customers.