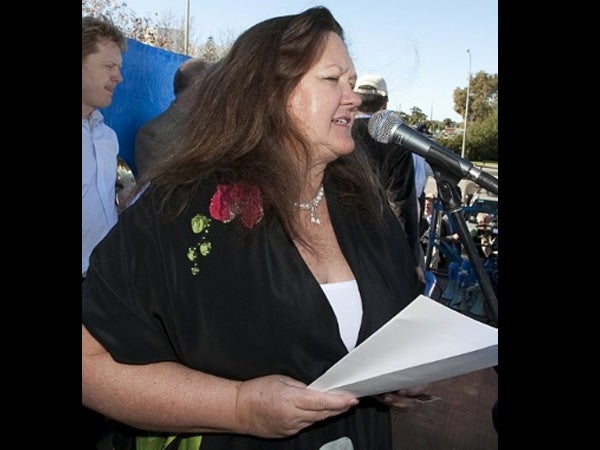 This image taken on June 9, 2010 shows Australian mining magnate Gina Rinehart speaking during a rally in Perth. The world’s richest woman Gina Rinehart is believed to have increased her holding in Australian media group Fairfax to more than 15 percent, reports said on June 15. AFP / Tony ASHBY

SYDNEY—Mining magnate Gina Rinehart had Aus$7 billion (US$6.8 billion) wiped off her fortune in the past year but remains Australia’s wealthiest person, an annual rich list showed Wednesday.

Rinehart, heiress to an iron ore prospecting empire built in Australia’s resources-rich west, led the respected BRW Rich 200 list for a third year in a row with a personal fortune of Aus$22.02 billion.

But she also lost more money than anyone else thanks to plunging iron ore prices, giving up a quarter of her estimated wealth from last year of Aus$29.17 billion.

That means she lost more than Aus$19 million every day in the last 12 months, and takes her out of contention for world’s richest woman, a title she claimed in 2012 from Wal-Mart heiress Christy Walton.

Rinehart was not the only mining billionaire to feel the squeeze with Ivan Glasenberg, chief executive of newly merged mining and commodities heavyweight GlencoreXstrata, down from second to fifth.

His fortune was put at Aus$5.61 billion, some Aus$1.79 billion lower than last year due to a falling company share price.

The Business Review Weekly magazine, known as BRW, said the five biggest falls this year were by mining industry figures, dragging down the value of the whole list.

Westfield shopping center tycoon Frank Lowy moved up from third to second, making an extra Aus$400 million to be worth Aus$6.87 billion. Lowy is one of 18 people who have appeared in the Rich 200 every year of its 30-year run.

One of the best performers was James Packer whose growing gambling and hospitality business boosted his wealth to Aus$6.00 billion from Aus$5.21 billion to put him in third, the list showed.

Men still dominate the BRW list with just 14 women among the top 200.